Theology and Science in Christianity and Islam: Building Capacity for Interreligious Engagement in the Majority World 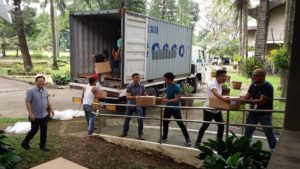 The stories of science and theology can be told, at least in part, as the story of the grand movement of books. Throughout the Judeo-Christian and Islamic worlds, key texts such as scriptures, metaphysical treatises, or mathematical proofs were carried from their points of origin to distant centers of learning where they were copied, translated, and used as the basis for more scholarship — and ultimately more books.

Even today, at thousands of theological institutions in the Majority World — ranging from university religion departments to remote seminaries — the books necessary for productive scholarship can be surprisingly difficult to come by. The logistics of selecting, ordering, and shipping key texts can be overwhelming, and getting a book to a specific institution often costs more than the book itself. Since 2004, the Grand Rapids, Michigan-based Theological Book Network has been procuring and sending sets of books to libraries at more than 1,800 partner institutions in 90 countries. Most of the two million books distributed by the Network over the past 15 years are part of general theological collections, but they regularly survey their partners to identify common weak areas in their collections and create curated capsule libraries to fill those gaps.

“Over the years we’ve found that nearly every institution wants more materials on Christianity and Islam, but around 75 percent also request more resources on basic science,” says Justin Holford, the Network’s chief operating officer. Because both Christianity and Islam have rich (if recently more fraught) connections to the development of modern scientific thought, Holford and his colleagues at the Network thought that a set of books centered on the historical dialogue between science, Christianity, and Islam might provide a set of perspectives to help their partners grapple well with contemporary issues. The end result was a multiyear project placing 10,000 books in the libraries of 250 theological institutions worldwide — making them available to over 20,000 students and hundreds of scholars.

Wayne Bornholdt, the Theological Book Network’s director of acquisitions, began the process by identifying expert bibliographies to get a sense of the range and quality of available academic books about Christianity, Islam, and science. The project aimed to send collections of up to 100 books in 50 advanced academic institutions (such as religion departments at national universities) with sets of up to 25 volumes going to an additional 200 smaller institutions (including seminaries and Bible colleges). Bornholdt worked to develop lists that would meet a given institution’s present needs as well as its potential for further growth as students and teachers become more familiar with the topics.

From there, the team drew on their relationships with publishers to determine which books were available at the right quantities and discounts. The result was a final master list of dozens of volumes from major university presses like Oxford, Cambridge, and Georgetown as well as smaller specialist theological publishing houses. Among its titles are many collections that provide a multi-voiced overview of the topics, including Nature and Scripture in the Abrahamic Religions, Science and Religion: Christian and Muslim Perspectives, and Learned Ignorance: Intellectual Humility among Jews, Christians and Muslims, as well as single-author works like Howard Turner’s Science in Medieval Islam: An Illustrated Introduction and Alvin Plantinga’s Where the Conflict Really Lies: Science, Religion, and Naturalism.

Once the list was made and the orders placed, publishers sent the books to the Network’s warehouse in Grand Rapids, where they were grouped and packaged for shipment to central partners — often a large university — within the countries or regions being served. From there, the books were collected by members of the receiving institutions and taken on the final leg of their journey.

Already, receiving institutions like the Ethiopian Graduate School of Theology in Addis Ababa have reported that the books are being used for journal articles and other writing projects, seminars, and conferences, and have been integrated into dozens of existing courses as well as new courses that touch on Christianity, Islam, and science.

“With these collections, we aren’t saying we want to produce any particular end, but rather to help stimulate thoughtful conversation, scholarship, and theologically-reflective engagement,” Holford says. “There are creative opportunities that might exist when you can have less-threatening ground for dialogue and engagement.”

Learn more about the Theological Book Network and the institutions with which it partners.