The Everything Happens Project

Fostering new and needed conversations about tragedy, hope, and beauty 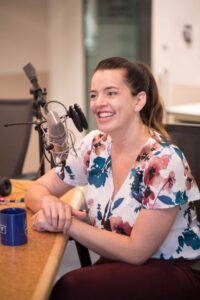 In 2015 at age 35, Kate Bowler, a historian of religion and assistant professor at Duke Divinity School, was diagnosed with Stage IV cancer. Facing the prospect that the life she’d worked to build — a prestigious education, promising academic career, husband and young son — could end, painfully, in a matter of months, Bowler felt profoundly ill-equipped to make sense of her own and others’ response to her new reality. “One of the weirder parts about an advanced cancer diagnosis is you’re half terrified and half extremely bored,” Bowler says. “I found myself with a lot of time to think, and I was overwhelmed almost right away at how thin the cultural scripts were around what I was supposed to say. It seemed really obvious that I was supposed to say that I was grateful for the lessons that I learned. When you think your life’s going to end, you’re trying to sum it up, but it was the fact that people wanted to sum it up for me that was not only emotionally devastating, but also intellectually exasperating.”

Bowler found that neither her academic expertise — she’d recently published Blessed, a history of American “prosperity gospel” megachurches — nor her own religious faith had fully prepared her for the experience. She began to write about her conundrum — first for herself (“just me crying into my laptop”), then in a New York Times op-ed, and then in a memoir, Everything Happens for a Reason and Other Lies I’ve Loved, published in 2018.

The same month her book launched, Bowler began hosting an interview podcast, Everything Happens, featuring her conversations with scientists, activists, thinkers, and writers about what they’ve learned through their work and through their own experiences with the difficult, unfathomable aspects of life. Now in its third season, Everything Happens has also been a vehicle for Bowler’s own exploration of how to recalibrate one’s life after trauma — when the worst appears about to happen, but then doesn’t quite. Bowler’s guests have included actor Alan Alda (on using improv to teach doctors and scientists to communicate more effectively), psychologist Angela Duckworth (on grit and resilience), former U.S. Surgeon General Vivek Murthy (on the health implications of chronic stress and isolation), and death penalty activist Sister Helen Prejean (on finding purpose through gentle nudges).

‘THINGS THAT ARE FOR NO REASON’

“I started the podcast as a way to try to make sense of the main themes of what it’s like to live with liminality,” Bowler says. “I’ve focused on the intellectual, emotional, and spiritual virtues you rediscover in that space. It turns out it is things that are for no reason, things that are non-instrumentizable, like joy.” Many of her guests are, like Bowler herself, skilled in academic study and gathering empirical data, but share elements of her own dissatisfaction with attempts to quantify that which really can’t be quantified. “A huge number of my guests are psychologists, sociologists, or doctors, but the spirit with which they enter into these conversations, I find to be very generative,” Bowler says. “They’re asking how do we create the conditions for more meaning-making and beauty and truth telling and resilience, but without the kind of proof-texting which asks suffering people to be the solutions for their own problems.”

Bowler jokes that her enthusiastic audience could be typecast as “sad NPR” listeners — engaged and curious people who see the importance of letting tragedy and beauty coexist. Many of the listeners she’s heard from have lived through their own tragedies, “anyone who’s fallen and hit every rung on the way down.” Many other listeners are people who are vocationally committed to alleviating suffering (social workers, medical professionals) who have grown frustrated with the triteness of language around suffering, and weary of the accumulating costs of their own service.

Since the outbreak of COVID-19, Bowler’s explorations are finding even wider relevance. “In the pandemic, everyone’s getting a crash course in a language I already learned,” she says. To build on that interest  and empower her listeners to learn from each other, Bowler’s team of producers — which includes Jessica Richie, Dustin Benac and Harriet Putman — has launched Life Together Apart, a seven-week set of video lessons, journaling prompts, digital resources, and a community comment comment thread to help listeners connect during the uncertainty of a liminal lockdown.

THE MARKET AND THE ACADEMY

Bowler says the podcast provides a helpful counterpoint to her ongoing teaching and research work at Duke. “I’ve structured it so that every new giant history book I’m writing is feeding into these podcasts,” she says. Meanwhile, having academic duties helps keep the market-driven momentum of the memoir and podcast from taking on too much of a life of its own — something she analyzed in her most recent book, The Preacher’s Wife, a study of evangelical woman celebrities. “One thing that book taught me is that the pace of the market is too fast, and the more authors try to work it, the more it will cannibalize them — they’ll have to produce faster and faster,” Bowler says.

“The most trusted institution in my life other than the church is the university,” Bowler says. “It’s sheltered from the storm, and will give you enough space to care about the things that the market will not reward. I think that there’s a richness to how the humanities and social science can inform deep questions of meaning-making and beauty and truth-telling and resilience without endless instrumentalization or hilarious empiricism. This is the gift of the university: that we like ideas for no reason, even when the market doesn’t reward it.”

Subscribe or view past episodes of the Everything Happens podcast.