The Development of Forgiveness 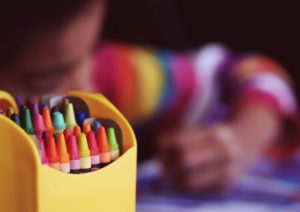 Nearly everything that humans have accomplished as a species — building cities, making works of art, waging war, surviving in harsh environments — is connected to our ability to make and maintain forms of social cooperation. But how have these social processes come about? One way to investigate is through the lens of broad-scale evolution, looking for evidence in human prehistory of when different forms of cooperation developed. Another way is to look at when aspects of social cooperation emerge in the course of individual lives. For the past several years Amrisha Vaish, an assistant professor of psychology at the University of Virginia, has been examining compassion and concern in children, studying when children gain the motivation to intervene to prevent transgressions, and at what stages they begin to show guilt, recognizing when their actions have damaged important relationships.

“A facet of being human is that we make mistakes and hurt others,” Vaish says. “We need to make amends and repair those relationships. Guilt essentially helps us to make repairs, to say ‘Let me make amends and let us continue this important relationship.’” Vaish realized that the expression of guilt is only half of the reparative process: “In order for the cycle to be complete, there has to be something that comes back from the victim — forgiveness.”

Vaish and her postdoctoral fellow Janine Oostenbroek recently published some of the first studies to examine whether children develop forgiveness at a relatively early age. They found that by age four, many children can experience and practice basic forms of forgiveness. By age five they are able to robustly practice forgiveness — and use it to affect their decisions around friendship and cooperation. Vaish says that prior work on forgiveness in child development had looked at older children. “People have been thinking about it, but it was pretty much limited to later childhood and adolescence, because it focused on a very cognitive understanding of forgiveness,” she says. “We needed to ask these questions in non-verbal, child-friendly ways, since young children are not great at reflecting on or verbalizing all the things they’re thinking and feeling.”

In her past research on the development of guilt, Vaish had designed experiments that looked at whether seeing a harm-doer express remorse to a third-party victim affected the child subject’s evaluations of the harm-doer and the child’s desire to interact with that person. Oostenbroek and Vaish then adapted the experiments to focus on forgiveness. They found that the child subjects were more likely to evaluate positively and want to interact with victims who forgave their harm-doers than victims who did not forgive. In other experiments they placed the child in the victim’s role to see whether they would respond by showing forgiveness. In this scenario, an adult actor would “accidentally” tear the child’s drawing and then either express remorse or make a more neutral comment about what had happened. What Oostenbroek and Vaish found was that somewhat for four-year-olds and robustly for five-year-olds, an expression of remorse made the children more likely to evaluate the transgressor more positively, want to continue playing with the transgressor, and even give them small gifts — indicating that the apology had helped to heal the minor social rift, and that forgiveness had been extended. In general, the four-year-olds needed a specific ritualized prompt like “I’m sorry” to recognize remorse and extend forgiveness, but the five-year-olds could follow the emotional subtext even when there wasn’t an explicit apology.

In a second set of studies, Oostenbrook and Vaish looked at whether young children, like adults, are more willing to extend forgiveness to certain kinds of people — particularly those they view to be part of their “in-group.” Five-year-old children and adult actors were randomly assigned to one of two color groups — green or yellow. Then both adult actors caused minor harm to the children and both showed remorse. The study showed that five-year-olds were more likely to accept apologies from people who were in their color group. “When it’s someone they expect to be closer or more similar to, they were more forgiving,” Vaish says. When only one of the two adults expressed remorse, though, the group preference fell by the wayside, and the children preferred the out-group apologizers to the people from their in-group who failed to show remorse. “They were able to abandon that group preference when much more immediate cues suggested to them that this is a person I can actually trust,” Vaish says.

Why, and what next

The initial publications provide some of the first experimental snapshots of the ways children develop the ability to forgive. Vaish thinks that four-year-olds were less reliable forgivers than five-year-olds for a number of reasons. “Emotional understanding is really blossoming between those ages as children participate in more normative social lives. Children are also becoming better at reading others’ emotions rather than relying on specific cues,” Vaish says. Meanwhile, the children’s broader executive functions — how well they control their thoughts and actions and keep multiple things in mind — are also developing between those ages in ways that would touch on their ability to recognize the pattern of transgression, remorse, and forgiveness.

In future research, Vaish hopes to focus on more complex forms of forgiveness. “In adults, we know forgiveness is complicated, has boundaries, has flexibility, and takes contextual factors into account. In children, we haven’t been asking those questions at all,” she says. Vaish hopes to tease out the difference in children’s reactions to remorse for different kinds of transgressions: how do intentional versus accidental injuries or patterns of repeated injury and apology affect children’s willingness to forgive and restore a relationship? “I want to ask what the children’s boundaries are, when they emerge in development, and whether they are stretchable,” Vaish says. “I’m essentially asking, what are the contours of forgiveness?”

Read two of Oestenbroek and Vaish’s publications on their forgiveness research: “The Emergence of Forgiveness” and “The Benefits of Forgiving: Young Children Respond Positively to Those Who Forgive.”