The ARTHUR Interactive Media Study: An Evaluation of a Technology-Based Curriculum to Promote Character Development and Prosocial Behavior

Buddying up to learn empathy, generosity, and forgiveness from the world’s most famous aardvark. 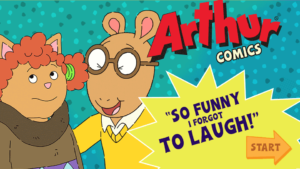 Arthur, the longest-running children’s animated television series, has garnered seven Emmys and a Peabody award over the course of 20 seasons on PBS. Produced by WGBH in Boston, the series has been broadcast in over 80 countries, making Arthur Read — the series’ titular third-grade anthropomorphic aardvark — one of the world’s best-known cartoon characters.

Throughout the show’s history, Arthur has explored childhood virtues, from love of reading to friendship. This legacy made the series a perfect match for a joint project between WGBH and Tufts University developmental psychologists. The Arthur Interactive Media Buddy Project created a series of interactive online comics designed to teach virtues such as empathy, forgiveness, humility, honesty, generosity, and learning from those who are different. The study adapted several storylines from the Arthur TV series but made them interactive, with pauses for children to consider what the different characters are thinking, choose the response the character will make, and see how the story then unfolds. In one story, when Arthur takes a joke too far and is accused of bullying his friend, students ponder the motivations for different characters’ responses and help Arthur decide whether to downplay the problem or to apologize.

In addition to working with WGBH’s writers, animators, and programmers on the interactive content, Richard Lerner and Lacey Hilliard of Tufts designed and carried out a test of the program’s effectiveness in classroom settings. In a study that involved 1,155 first through fifth graders in 90 classrooms spread across nine schools, students were paired with a “buddy” from a different grade so that the older students could help the younger ones make their way through the curriculum. Some pairs used the Arthur curriculum; control groups either received no interventions or were given a reading curriculum to work through with their buddies.

The students’ interactions were videotaped and their engagement with the Arthur stories and their buddies was measured with surveys given to the students. Lerner, who directs Tufts’ Institute for Applied Research in Youth Development, says that the buddy pairs offered an obvious approach for the interactive curriculum. “Character development is a relational process,” he says. “Character is a construct that links the person positively to his or her social world. It wasn’t a far conceptual leap for us to say the way to create this link with kids is to pair them with somewhat older kids — it’s building the essence of the relationships that are the foundation of character.”

Hilliard, who served as project manager for both the development and the testing of the curriculum, says that the initial results of the study were very encouraging. In the classrooms that followed the curriculum most closely, Hilliard says, “we found significant increases in outcome measures of empathy and tolerance, and among younger students, we also found significant increases in future-mindedness and positive perceptions of their classroom climate.”

Students who completed the curriculum were much more able to correctly identify concepts covered in the Arthur comics. More importantly, when the students were surveyed again six months after finishing the program, they had largely retained the lessons. “We saw an increase in understanding of complex topics such as honesty and forgiveness,” Hilliard says. “And the students in the Arthur conditions overall were more likely to show that complex thinking. So what this finding tells us is that it really stuck with them.”

Hilliard also noted another striking effect of the Arthur stories: students who had worked through the series were more likely to say that their most important value was being a good person rather than getting good grades or being popular. 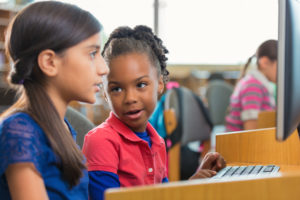 The Arthur project was particularly interesting for the ways it explores the possible connections between technology-based storytelling and in-person human interactions. “One of the realities of the current context of child development is that the major waking context for American children today is screen time,” Lerner says. “We can bemoan that, or we can try to understand if we can use screen time in a way that promotes positive development in kids.”

For instance, Lerner and Hilliard are already exploring ways that the Arthur interactive stories can be used by military personnel overseas.

“Think of all the deployed parents who still want to be active engaged parents with their kids,” Lerner says. “The only tool they have is communicating from the Middle East to back home on screen time. Arthur is a tool parents and kids could use that will keep the kids engaged and allow deployed parents to feel they’re having a positive parenting effect.”