Slowing down the discourse on the meanings of today’s fast-paced technological and scientific change. 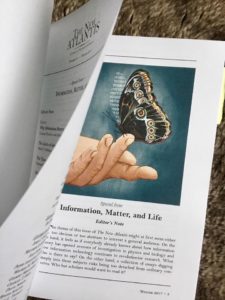 Illustration and photograph by Derik Hobbs

Are we alone in the cosmos, and if so, how should we think of ourselves? What do the insights of evolutionary theory mean for ethics? Is the so-called replication crisis a sign that modern science is self-correcting or that it has dangerously lost its way? How does the evolving theory of information in physics change the way we understand ourselves and the world? In a world dominated by Twitter conversations, addressing big questions in ways that require more than 280 characters is difficult. Tackling them requires careful, deliberate reflection, multiple vantage points, and an approach that aims to be both of-the-moment and timeless.

Founded in 2003, The New Atlantis is a quarterly publication about the ethical and philosophical implications of modern technology and science. The magazine, which takes its name from Francis Bacon’s 1627 fable of a society suffused with the latest scientific and technological knowledge, resolutely aims to take the long view about the peril and promise that contemporary technology offers. “By adopting this name, The New Atlantis, we gesture to the fact that we are part of an ongoing,  several-centuries-long conversation about the link between science, technology, and human nature,” says Ari Schulman, the magazine’s current editor. “We aspire to provide answers that are going to be relevant long after we’re done with our work.”

Beginning in 2015, the John Templeton Foundation provided funding for a series of special sections in The New Atlantis, allowing the magazine’s editors and writers to devote additional resources to address many such big questions. In several sets of paired essays and one full seven-article issue, The New Atlantis probed questions with no easy answers but many important implications.

WHERE WE ARE, WHERE WE’VE COME FROM

Two of the magazine’s special sections paired philosophical and scientific reflections on key topics. The fall 2015 section on “Human Uniqueness and the Cosmos” included an essay by MIT professor Sara Seager on the hunt for exoplanets followed by a reflection Dartmouth astronomy professor Marcelo Gleiser on the absence of evidence to date of intelligent life on any of the other worlds — what he describes as “our cosmic loneliness and our cosmic significance.”

A similar set of essays on evolution and ethics anchored a special section entitled “Descent of Man” that appeared in the spring of 2017. Biologist Kevin Laland examined the latest findings on the evolutionary origins of human cooperation, while philosopher of science Michael Ruse provided a 5,600-word essay on how our culture’s growing internalization of evolutionary theory may have the side effect of undermining our ethical foundations.

The New Atlantis devoted its full Winter 2017 issue to “Information, Matter and Life.” In his introduction to the set of seven essays, Adam Keiper (cofounder of The New Atlantis and editor through 2017) offered an overview: “A motif running through these essays is that, especially in contemporary science, information has become something of an ideology,” he said. “These big questions about fundamental reality are inextricably bound up with our self-understanding, including our beliefs about free will and the nature of consciousness. And these beliefs are in turn bound up with many more practical questions concerning how we can live well together.”

In the lead essay for the Information issue, Oxford ethicist and philosopher of information Luciano Floridi noted that “There is no ethics without choices, responsibilities, and moral evaluations, all of which need a lot of relevant and reliable information and quite good management of it.” For Floridi, the philosophy of information is vital and exciting precisely because it makes possible “the construction, conceptualization, and also the moral stewardship of reality, both natural and artificial, both physical and anthropological.”

The New Atlantis “Big Questions” series that has caused the greatest stir — and is still creating ripples through academic citations and late-arriving Twitter reviews — was the “Integrity of Science” section published in the summer of 2016. Released in the context of several recent high-profile retractions in elite scientific publications, as well as a growing “replicability crisis” in which researchers were unable to reproduce the results of many highly-cited studies, the section examined how modern, Western science arrived at its present situation and possible ways forward.

Science journalists Ivan Oransky and Adam Marcus offered “Two Cheers for the Retraction Boom,” suggesting that increasing retractions were a sign of self-correction within science. Former law and psychology professor and journal editor Barbara Spellman gave an analysis of the demographic trends in science and science publishing that led to the crisis. She suggested possible solutions, recommending moves towards open science frameworks and alternative venues for published research, including online-only journals.

The biggest stir, though, was created by Arizona State University professor Dan Sarewitz’s bracing call for “Saving Science.” In Sarewitz’s view, the most productive way to practice science is actually to avoid the ideal of curiosity-driven investigation unfettered by an aim to solve specific technical problems. “Scientific knowledge advances most rapidly, and is of most value to society, not when its course is determined by the ‘free play of free intellects’ but when it is steered to solve problems — especially those related to technological innovation,” Sarewitz writes. The problem-solving approach to science, in large part driven by U.S. military research funding, resulted in numerous discoveries which made possible many of the advances — from microprocessors to the Internet — that underpin technologies used widely today. In Sarewitz’s view, basic research without an end-goal in mind can become indifferent or even irresponsible. “Advancing according to its own logic, much of science has lost sight of the better world it is supposed to help create,” he writes.

Looking towards the future, Schulman hopes to steer The New Atlantis towards other big questions, including the ethical implications of the new gene-editing technique CRISPR/Cas9 and of new innovations in cognitive science related to moral foundations theory and behavioral economics. Another question Schulman hopes to unpack is close to the central mission of The New Atlantis: the changing relationship between technology and discourse, from the invention of writing to the rise of social media. Although few people will say they have time to read a 10,000-word essay on the philosophical implications of anything, there is still a need — and a small but important audience — for such work. “The magazine format for prompting deep reflection has become much even more vital than it used to be,” Schulman says, “not simply because it provides this great avenue for interesting ideas, but because it is cultivating a style of slower discourse and slower virtue of thought.”

Read the latest essays and news from The New Atlantis.