SelfBound: The Making of Human Consciousness

How making makes us who we are 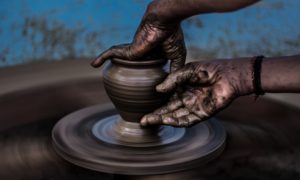 When a potter makes a vase, what’s the best way to describe the imaginative process by which the vessel takes shape under the pressure of her fingers and the rotation of the wheel? A standard description might be that the potter thinks about what she wants to happen and then makes a series of motions and adjustments to create the final shape. A more poetic description might say the vase comes into being through a dialogue between what the artist intends and what the clay itself seems to want. Or, as cognitive archaeologist and Oxford University research and teaching fellow Lambros Malafouris puts it, “it is as if the potter’s intentions inhabit the clay and the affordances of clay bring forth the potter’s intentions.” So if the finished vase is seen as an expression of the artist’s self, where does that self reside: solely in her body, or are the self’s boundaries best considered more broadly, encompassing not just brain and fingers but also the artist’s interaction with material artifacts? Malafouris favors the broad view. In recent years he has helped to advance a conception of selfhood called Material Engagement Theory, which argues that who we are is inseparable from the artifacts that we create: we not only make things but are also made by them. It’s an idea that has profound implications for how we think about humanity’s past and how we navigate our present.

Cognitive archaeology — the study of the evolution of the human mind — is much more about processes than essences, Malafouris says. “My underlying theme is that of human becoming, rather than ‘becoming human,” he says. “I argue for an ongoing human becoming which remains unfolding — one that could be seen as an incomplete process rather than an end product called Homo sapiens.” In 2013 Malafouros published How Things Shape the Mind, a book-length exploration of the role of material objects in human cognition. He is currently finalizing the manuscript for a new book, SelfBound: The Making of Human Consciousness, which was produced in part through a writing grant from the John Templeton Foundation.

Two recent journal publications by Malafouris give a preview of the ideas he develops at length in SelfBound. “Mind and material engagement,” published in Phenomenology and the Cognitive Sciences, offers a defense of what he terms “thinging” — an object-mediated analogue to thinking. “Thinking is usually understood as something we do about things in the absence of things,” Malafouris writes. “On the contrary thinging denotes the kind of thinking we do primarily with and through things. For the material engagement approach withness and throughness takes precedence over aboutness.” The essay ends with a significant unpacking of the metaphor of the potter’s interaction with the vase as it forms: “The mind is not imposed or opposed to matter. Rather, mind and matter merge together in the activities and experience of the situated bodies that carry forward the process of thinking. What we see is not mind or matter; nature or culture; it is instead a way of thinking and feeling with and through the soft clay.”

The second piece, “Homo faber Revisited,” published in the journal Philosophy & Technology, takes from its title the phrase used by late 19th and early 20th century French philosopher Henri Bergson, that “we should say not Homo sapiens but Homo faber” — not ‘man the thinker’ but ‘man the maker.’” Malafouris and his co-authors are quick to downplay Bergson’s fixation on humans’ ultimate uniqueness (not least because numerous animal species are now known to use their own tools). Our making and use of material artifacts may not make us unique, but it has inexorably shaped how humans continue to develop: “The difference that makes the difference is not just the fact that we make things. The difference that makes the difference is the recursive effect that the things that we make and our skills of making seem to have on human becoming. We argue that we are Homo faber not just because we make things but also because we are made by them.”

Though we cannot speak directly to people from seven hundred or seven thousand years ago to discover who they were or how they thought, in many cases we still have access to material things they left behind — objects which, Malafouris argues, are not merely the byproduct of their selfhood but an integral part of it. But a materially-oriented view of the self is hardly limited to history or archaeology — it has plenty of insight (and challenges) to offer to the ways we understand humanity’s present and future. Whatever it is that humans are becoming will be shaped by our creation of and dialogue with material artifacts. SelfBound will attempt to touch on the breadth of that time scale — Malafouris is including a chapter on early tool use in human prehistory as well as an overview of contemporary digital materiality and culture. “I think that the technologies we use structure our lives in an important way, have a strong impact, and in that sense we participate in this process of constant change,” he says. “We have to find new ways to adapt and coevolve with those techniques.”

Malafouris cites the examples of personal fitness trackers or carefully curated online profiles — two examples of technologies used to give ourselves (or others) meaningful data about who we are. “Very often people tend to take that for more than it really is,”  he says. “You construct a type of ontology around this and you think that this is you.”

For his own part, Malafouris says that his growing understanding of how materiality mediates not just his own sense of self but all of his social relations has given him a better perspective. “We use materiality all the time without necessarily knowing the implications or the impact it has on us,” he says. “We are good at retaining a sense of agency or individuality. We like to think of ourselves as the agents, but very often we are the product of our own making.”