Opportunity M: The Fast Track to Find Other Inhabited Worlds 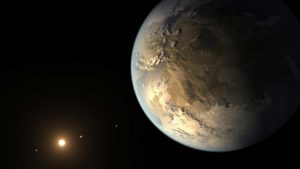 On October 30, 2018, after its maneuvering fuel was finished, the Kepler Space Telescope retired. This date marked the end of its nine-year mission, during which it aided the discovery of 2,662 exoplanets. (The first confirmed exoplanet was discovered only in 1992.) “Kepler broke open the galactic treasure chest of smaller earth-size planets and we learned how common they were,” says David Charbonneau, a professor of astronomy at Harvard University and an expert in planetary discovery. “We now know that exoplanets are incredibly common, that most if not all stars have planets — it’s sort of an inevitable part of making a star. But the actual stars that Kepler looked at were very far away, so it was good for getting population statistics but not actually for providing the very best targets that we could go and study in detail.”

In search of better targets, Charbonneau, together with David Latham at the Harvard-Smithsonian Center for Astrophysics, has launched a new project to look for earthlike planets — and eventually, possible signs of life on them. They are focusing on the most common type of star in our galaxy, so-called M-type stars or red dwarfs, which are between 10 and 60 percent of the mass of the Sun. M-type stars are dim and relatively cool, which makes them harder to observe, but they have other useful qualities for planet-hunters: their lower intensity means that such earthlike planets, which have a rocky surface and liquid water, can have smaller and faster orbits than those in larger star systems. Because most exoplanet detection depends on observing transits when a planet comes between the surface of its star and the observer, the geometry and timing of smaller, faster orbits makes it much easier for astronomers to observe transits and extrapolate data about the planets’ size and density.

Charbonneau and Latham’s project has three main scientific components. First, it will utilize space-based telescopes such as the newly-launched Transiting Exoplanet Survey Satellite (TESS), for which Latham serves as science director, as well as ground-based telescopes including the MEarth robotic arrays in Arizona and Chile, to survey the spectra of all the nearby stars, including M-type stars. The next phase will focus on identifying transiting planets within those star systems to develop a short-list of candidates for further observation.

The third phase is to develop tools to perform as-yet impossible analysis of those exoplanets’ atmospheres, starting with the search for evidence of oxygen, which would suggest the presence of life. Latham and Charbonneau’s colleague Mercedes Lopez-Morales is developing a custom spectrometer that will allow for detection of oxygen using very little source-light. Such a device can be integrated into the new generation of very large earth-based telescopes scheduled to go into operation in the coming five years, including the 24.5-meter Giant Magellan Telescope being built at the Las Campanas Observatory in Chile. “It seems almost crazy to build a whole instrument to just go after one gas in as few as 10 target planets,” Charbonneau says, “But the question of life in the universe is so big that people really say that’s well worth it.”

Charbonneau likes to note that the questions he and his team are trying to answer — whether there is life elsewhere in the universe — predates modern astronomy. “If you look back through the written record of human history people have been asking whether or not there’s aliens for a very long time,” he says. “It’s one of the greatest unknowns, and one of the greatest questions for all of humanity.”

Not content to simply find and study planets, Charbonneau and Latham’s team are also hoping to help facilitate reflection on the meaning of those age-old questions in light of new discoveries through the creation of a massive online course, to be offered through the Harvard’s EdX platform, to discuss how people with deep faith reconcile their spiritual beliefs with their scientific work and with potential discoveries about the abundance (or rarity) of life in the universe. That effort is being led by another colleague, Harvard astrophysics professor Karin Öberg, who is currently teaching a precursor seminar to discover the best way to guide students through the rich questions that planetary discovery can raise. “Today it falls to astronomers to build telescopes and figure out how to measure things and really train students and and develop that infrastructure,” Charbonneau says. “But I think the implications the question go way beyond astronomy.”

Charbonneau and Latham proudly point out the role they see for projects like Opportunity M to lay the groundwork not just for future technological advances but for a new generation of astrophysicists. “A lot of the effort the actual work is being done by students who I expect will actually be the ones that make these discoveries down the road,” Charbonneau says. “If there is life beyond the solar system, then there’s only one generation that gets to make that discovery. Up until now we’ve been able to imagine what might be out there. But this is the first generation that could actually go and make that measurement.”

Explore the some of the first observations transmitted by the newly launched Transiting Exoplanet Survey Satellite (TESS).