National Series of High School Debates on the Big Questions

Thousands of U.S. high school students are now getting training and a forum to discuss key scientific and philosophical issues. 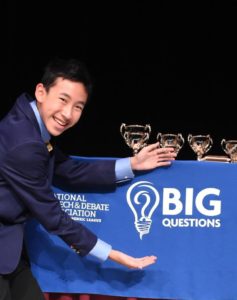 Are humans fundamentally different from other animals? Seung Joh Cho, a high school student from Austin, Tex., is well acquainted with both sides of the question. But on June 22, 2018, Cho took the stage in the final debate of the 2018 National Speech & Debate Tournament in Fort Lauderdale to argue the affirmative case. Cho cited the arguments of scientists and philosophers concerning uniquely human achievements in the areas of language, mathematics, and ethics as he sparred with opponent, Clare Abboud, of Massillon, Ohio. Both finalists had advanced through multiple rounds by defending each side of the topic. Cho won debate, netting a national championship and a $10,000 college scholarship, while runner-up Abboud received a $5,000 scholarship.

Formerly known as the National Forensics League, the National Speech & Debate Association (NSDA) is the nation’s largest and most prestigious student debating society, serving 150,000 students and drawing 10,000 participants to its national tournament. The 2017-2018 student debate season was the second to feature the Big Questions Debate, an adaptation of the Lincoln-Douglas debate style focusing on questions at the intersection of science, philosophy, and religion. Its initial popularity already led the NSDA to extend the series from high school to middle school debate. In the second year of the program, there were over 600 Big Questions Debate events, with 17,000 student participants from more than 40 states. “What has been really exciting for me is how quickly the community has grabbed onto something that was absolutely brand-new,” says NSDA Executive Director W. Scott Munn. “In the academic high school and middle school debate community, it’s not necessarily normal for something to take hold so quickly — like wildfire.”

Lauren Burdt, who heads the Big Questions Debate within the NSDA, noted that the format’s popularity comes precisely because it addresses topics seen as either too controversial or too elevated for secondary school students. “What the Big Questions topics have allowed us to do is introduce a topic to students in an organized way, giving their coaches and teachers resources to help support them in having an educated conversation,” Burdt says.

The Big Questions Debate format was designed both for extracurricular debate competitions like the tournament in Fort Lauderdale and for integration into school classes “The rounds are made to be slightly shorter so that we could involve more audiences and fit them into a classroom setting,” notes Nicole Wanzer-Serrano, who leads the NSDA’s philanthropic outreach efforts. “That was important to make sure that high school science and philosophy teachers could conduct a debate round in their classes.”

In addition to classroom materials, the Big Questions Debate program provides micro-grants to help supplement the costs of starting up and running student debate programs. “This year we had schools invest about two million dollars in in-kind support for transportation, hospitality, and judging for the tournaments,” Burdt says. “That just speaks to the levels that these coaches, teachers, and students will go to elevate those events to be good experiences.” 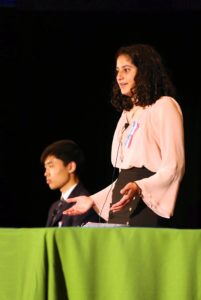 For its initial three years, the Big Questions Debate is focusing on a single resolution for each of the academic debate years. The inaugural Big Question was “Resolved: Science leaves no room for free will.” For the 2018-2019 season, students will examine the affirmative and negative responses to the prompt “Resolved: Humans are primarily driven by self-interest.” Focusing on one big question per academic year allows teachers and coaches the space to help students understand and argue for all sides of an issue that lacks a clear answer (in rounds of every tournament each student has to argue both sides of the issue). This means learning to handle both philosophical arguments and scientific evidence. Burdt recalls being delighted to hear middle school debaters talking about p-values to analyze the statistical significance different scientific studies. “Seeing them apply that to justify their argument and then use that to answer broader questions is really unique to this format,” she says.

Wunn agrees. “There’s just something about being able to debate beyond just absolute practicality, really looking at questions that are so big there isn’t a definitive resolution to it,” he says. “That level of critical thinking can get lost in education these days, but Big Questions is allowing that to happen in debate events again.”

Spot the reference to the Big Questions Debate in this episode of the game show Jeopardy!