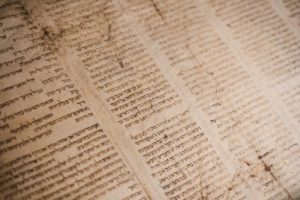 Despite the ways in which Jewish conceptions of God have shaped many of the world’s religious traditions, serious constructive theology is not a discipline often practiced by contemporary Jewish scholars, says Yoram Hazony, an Orthodox Jewish philosopher and president of the Jerusalem-based Hertzel Center. “The resources for theological exploration are definitely available,” Hazony says, “but they’re not so much pursued by the community, which tends to be oriented towards thinking about how God expects us to behave and what constitutes the best way to live.”

Hazony believes that orthodox Jews still confront many unanswered questions about God and God’s nature, and that the Hebrew Bible and classical rabbinic sources may still yield new tools and approaches for, he says, “approaching fundamental questions about the nature of God, the ultimate nature of reality, metaphysics, as well as human flourishing, human virtue, and our relationship to God.”

Between 2015 and 2017, Hazony and his colleagues Joshua Weinstein and Rabbi Raffi Eis led a wide-ranging project to promote new work in Jewish theology and philosophy — supporting the work of leading scholars and gathering academic and religious leaders for conferences to advance Jewish theological and philosophical inquiry.

OF PROPHETS AND PERFECT BEINGS

The first conference under the Jewish Philosophical Theology project, held in 2016, addressed the question of God’s perfection. “There is a very strong bias in the theological tradition to take Platonic or Aristotelian categories and assume that those are the same categories that are being used in the Jewish tradition in order to understand God and the nature of Reality,” Hazony says. “The idea that God is a perfect being is descended from the Greek tradition, but the biblical tradition tends to approach God as sublime and ungraspable. That creates a whole different picture. How are you supposed to think about God when human limitations prevent us from being able to describe him Him in more than a partial or fragmentary fashion?”

Another conference under the project focused on the nature of the revelation at Sinai — when the books of the Torah were handed down to Moses. “A central Jewish concept in theology is the concept of Torah from heaven — that the teaching that we receive is in some way revealed in Sinai,” Hazony says. “A wonderful question is, What is that supposed to mean?”

Hazony continues: “None of us receives the complete divine revelation directly from God. So how do we receive it, and how are we supposed to understand the content of what it is that we’re receiving?” Hazony believes that asking those questions means clarifying one’s thoughts both about what happened at Sinai and how that informs Jewish understanding of other prophecy.

The Jewish Philosophical Theology project also provided funding for several books in progress, including  volumes forthcoming from Oxford University Press on Jewish theology by Vanderbilt University philosophy professor Lenn Goodman and University of Waterloo Jewish studies professor Jim Diamond. During the project, Hazony himself published, God and Politics in Esther, which includes several chapters on Biblical theology and the emergence of key ideas about God and God’s nature in history.

Beyond the published works, Hazony hopes that the current investment in Jewish philosophical theology will yield lasting fruit. “We would like to contribute to a revival of theological education among professionals teaching Torah and Judaism, and see it trickle down to the schools and the way that Judaism is taught,” he explains.

“With any new academic paradigm, you hope that it’ll get a fair hearing and that people will be willing to rethink in a serious way what we know about God and how we know about God,” Hazony says. “That’s a tall order. People don’t like to think about things that have been settled for centuries. Getting to challenge the accepted ways of doing things and to advance knowledge is very exciting and very gratifying.”