Hidden Depths: The ancestry of our most human emotions

Many of the social virtues we think of as unique to modern humans may have developed far earlier than previously thought. 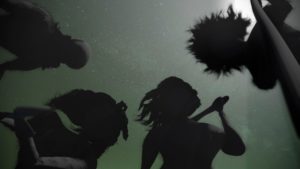 Since the 19th-century discovery of their first known remains in Germany’s Neander Valley, the archaic human species known as Neanderthals have gotten a bad rap. Thanks in part to their stocky proportions and thick brows, they came to exemplify the “caveman” stereotype of archaic humans — primitively aggressive and self-interested, lacking social virtues and refinements. “Our existing narrative has been so much to do with selfish competition that any contrary evidence has been treated like an interesting side story that we can’t really integrate,” says Penny Spikins, an evolutionary anthropologist at the University of York in the U.K., expert in the human archaeology of Mesolithic Europe, and the author of the 2016 book How Compassion Made Us Human.

For the past few years, Spikins and others have been working to bring to the fore those forgotten side stories, as well as new evidence, to change the way we conceive of Neanderthals and other ancient humans while offering insight into the way that modern prosocial virtues such as compassion, tolerance, and patience may have evolved.

Since 2017, the John Templeton Foundation has funded Spikins’ research and her efforts to change the public perception of what Neanderthals and other early humans were like — and what lessons their development of compassionate and tolerant behaviors might have for people today.

At a dig site in the Shanidar Cave in Iraq, archaeologists uncovered the remains of a male Neanderthal that offered remarkable details of a life lived more than 40,000 years ago. The individual, known as Shanidar 1, was between 35 and 50 years old when he died, but had apparently suffered from a number of impairments, including ones caused by a violent blow to the face, likely sustained as a young adult, that had damaged his eyesight. He also had a withered right arm, deformities in his leg and foot, and a likely hearing impairment. Shanidar 1 was the sort of individual who would not survive long in a brutal, self-interested society where resources were scarce. Yet he had managed to live with his injuries and disabilities for years or even decades — despite likely requiring daily help with food and other assistance. (Another individual from the same cave, Shanidar 3, also had evidence of having lived with a debilitating injury).

Spikins and project colleague Andrew Needham have come to believe that such records of survival were not anomalies but signs that caring for the vulnerable was a feature of Neanderthal societies — and perhaps even a competitive advantage for Neanderthals as they competed for scarce resources at times of ecological change.

Even as she works to counter the previous narrative about Neanderthal self-interest, Spikins is cautious about replacing one overly simple narrative with another. “I never say that Neanderthals were compassionate as such,” she says. “What we’re interested in is how the capacity for compassion evolved. When we see patterns in the archaeological record, we can infer a change in this capacity, starting with some very fleeting help for the ill and injured and then becomes something much more long-term and sustained. But that doesn’t mean that any individual Neandertal was a very compassionate person.”

SEARCHING FOR AUTISM IN THE MESOLITHIC

Tolerance of difference is another seemingly modern virtue that may have developed among ancient humans. Over the past several years Spikins has scoured the archaeological record for evidence of the presence — and value — of non-neurotypical individuals among early human hunter-gatherers.

“Today we see conditions like autism as part of neurodiversity, as part of population variation,” Spikins says. “If people with autism make a huge contribution in computing, mathematics, or physics, then could something analogous have been true in the past?” To investigate that, Spikins and her team have examined the archaeological record for artifacts that show traits — like extreme attention to detail — that are common among modern people with autism.

“We’re never going to look at an artifact and say someone with autism made that,” Spikins says. “But we can start to say, ‘This is really interesting because it occurs in these particular regions where detail-focus helps you survive.’” As with compassion, forms of tolerance may have evolved as a way of preserving unique capabilities within early human groups, where the extra effort needed to accommodate an atypical individual helped maintain valuable additional skills and resources for the larger group. Spikins is also gathering evidence to help us understand how tolerance may have functioned between groups of early humans. “We can look into the archaeological record and map social behaviors and connections between different groups, which can allow us to map how tolerance changes,” Spikins says.

In addition to academic work and publications, Spikins and her team are devoting significant effort to making their findings more broadly available, in the hopes of both changing the way we think about humans’ distant past and informing the way people think about virtue in the present day. Next year Spikins will publish a new book, Hidden Depths: The Ancestry of Our Most Human Emotions, a follow-up to How Compassion Made Us Human, focusing on new findings related to early human compassion and tolerance. The book will be available in print and as an open-access ebook. Spikins’ colleague Taryn Bell, meanwhile, has adapted some of the project’s findings into a website designed to help teenagers think about compassion through the lens of Neanderthal life.

“If you’re an adolescent and you start talking about whether you feel compassionate, that puts you under pressure,” Spikins says. “So our idea was set it up to work in a school so that teenagers would, as a group, start asking each other why people in the past would have cared and looked after someone who was ill?”

“The kind of adolescents that you want to connect to are the ones who want to be tough,” Spikins says. “They’re certainly not going to go along to something that labels itself as a self-compassion workshop. But if they’re interested in Neanderthals, then through that they can start to think about things.”

Spikins says that her next main research focus will be on expanding our understanding of how another virtue — gratitude — may have evolved among early humans. This will involve both looking at the archaeological record and looking at how behaviors similar to gratitude are observed in non-human species. Spikins sees this form of gratitude as a simple form of “paying it forward” — “it’s what happens when you’re altruistic to someone and then they’re altruistic to someone else,” she says.

For the new work, Spikins is particularly keen to look beyond the most commonly-studied non-human example: chimpanzees. Although they are our closest living genetic relatives, Spikins says that chimps are not the best place to look for the forerunners of virtues. “I don’t think you can understand gratitude by saying, ‘Let’s look at what happens in chimps and let’s look at what happens in modern humans.’ Chimpanzees are not terribly altruistic or kind to each other,” Spikins says. “Other primates like marmosets are much more altruistic because they’re collaborative breeders, while species like wolves are also a much better model for collaboration, because they share food and take risks on behalf of the whole group. We need to move away from simple analogies and understand the ecology and complexity of other species as well.”

Spikins and her colleagues have published several journal articles related to the project, including “Calculated or caring? Neanderthal healthcare in social context” and “How Do We Explain ‛Autistic Traits’ in European Upper Palaeolithic Art?”

A helpful overview of the findings — for teenagers or interested adults — can be found through the Hidden Depths curriculum website.