From Oslo to Johannesburg and beyond, writing the next chapter for a storied human rights gathering 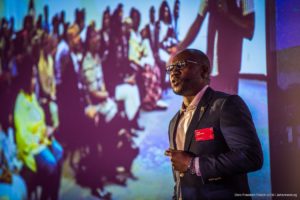 In April of 2016, Evan Mawarire, a 39-year-old pastor from Harare, Zimbabwe, posted an impromptu video on Facebook titled “This Flag.” The video is a meditation on the symbolism of his country’s national banner in protest of Zimbabwean president Robert Mugabe, the former independence fighter who had ruled his country with ever-increasing levels of authoritarianism since 1977. “This flag — every day that it flies,” Mawarire pleaded, “is begging for you to get involved.”

Mawarire’s video and more than 20 others that he posted in the ensuing weeks helped touch off a movement, centered around the hashtag #thisflag. The videos made him a national figure and led to his arrest on multiple occasions by Zimbabwean authorities in the months leading up to Mugabe’s dramatic removal from power in November of 2017.

Not quite two years after posting his initial Facebook video, Mawarire was able to take the stage in Johannesburg, South Africa to share his story at the inaugural Oslo Freedom Forum in Johannesburg, an international gathering of activists, and allies from the worlds of technology, media and education that marks a new phase in the 10-year history of the Oslo Freedom Forum.

‘THE INCREDIBLE PROWESS OF THE HUMAN SPIRIT’

The first Oslo Freedom Forum was organized by Venezuelan-born human rights activist Thor Halvorssen and held in the Norwegian capital in 2009. “The original idea was to get authors who had written testimonies of both the horrible things that humans do to one another and the incredible prowess of the human spirit,” says Alex Gladstein, who is chief strategy officer for the Human Rights Foundation, which runs the forum and its offshoots. The first Oslo Freedom Forum featured writers including dissident playwright-turned Czech president Vaclav Havel, Holocaust survivor and Nobel Peace Prize-winner Elie Wiesel, former Soviet prisoner of conscience Vladimir Bukovsky and Mao Zedong biographer Jung Chang.

What was to be a one-time event celebrating noble purpose turned into an annual affair that The Economist would eventually dub a “Davos for dissidents” — an annual meeting for people doing similar work around the globe to meet, share ideas and plan new ventures. As the forum’s 10-year anniversary approached, Halvorssen and Gladstein approached the John Templeton Foundation — which had contributed funding for the first Oslo Freedom Forum — with a proposal for expansion. “We wanted to take the successful seed event in Norway and bring that experience to different cultures and different parts of the world,” Gladstein says. The resulting project is rolling out three regional versions of the Oslo Freedom Forum, to be held annually in Johannesburg, Taipei, and Mexico City. The new gatherings will be overseen by the Human Rights Foundation team including Halvorssen, Gladstein and Freedom Forum global director Jamie Hancock.

The Johannesburg event was the first run of a template for the other regional forums. It brought inspiring speakers who have already given TED-style talks at the main Oslo Freedom Forum to audiences less-far-removed from places where human rights and political freedoms are hampered. “In South Africa, if you are more than 35 years old you remember dictatorship personally,” Gladstein says. “That was something that allows the audience to really connect a little bit more deeply with the struggles of the speakers who are now facing something similar in Zimbabwe or China or Eritrea.”

Round-table discussions for leaders from the worlds of activism, business and government are also a key element of the global freedom forum concept. “When you get all the different companies, foundations, lawmakers and diplomats, you have all these people going around and putting forward their ideas of how they could make a difference in the struggle for human freedom,” Gladstein says. “It’s very inspiring, and hopefully also productive.” All three of the new regional forums will maintain a largely local focus (most of the speakers in Johannesburg came African countries, from Egypt to Swaziland) but with some cross-pollination to learn from activists working in other contexts.

Although most of the stories told onstage maintain a resolute commitment to the uplifting aspects of the activists’ struggles, Gladstein said some of the Johannesburg forum’s most thrilling moments emerged when events had a chance to provoke the those in positions of power. A press conference with an Eritrean activist turned into a heated discussion with a U.N. representative who was present about the ways that the United Nations had failed to do enough to counter that country’s authoritarian government. And when word reached Egyptian officials that conference speaker Omar Sharif, Jr. published an op-ed for the Mail & Guardian, South Africa’s leading newspaper, they made an unsuccessful attempt to convince the newspaper’s editor retract its publication. “This was extraordinary to see,” Gladstein says. “A nation-state doesn’t do this unless something has made an impact.”

For his part, Evan Mawarire used his time in Johannesburg to launch his latest campaign. The morning after he spoke at the Oslo Freedom Forum in Johannesburg, he made another Facebook post from his hotel room—announcing he is running as a political independent for a spot on Harare’s city council. Having dealt with arrest and imprisonment, and played a role in the ouster of one of the continent’s longest-lasting dictators, the #thisflag activist now hopes to help secure clean water, pothole-free streets and a free media for his neighbors in his country’s capital.

Learn more about the Oslo Freedom Forum and watch the highlights video for the 2018 Johannesburg edition of the conference.

Watch Evan Mawarire tell the story of #ThisFlag and launch his campaign for Harare’s city council.