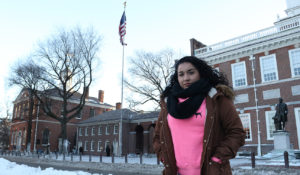 Ivette Salazar outside of Independence Hall in Philadelphia. Photo courtesy of FIRE/Chris Maltby.

When Ivette Salazar, a student at Joliet Junior College in Chicago, saw conservative students passing out literature on the evils of socialism on her campus, she decided she wanted to share her own viewpoint and so began distributing pro-socialist fliers with the headline “Shut Down Capitalism.” Instead she was the one who was shut down, detained by campus police and questioned for 15-20 minutes. Her fliers were confiscated after she was told her First Amendment right to free speech only applied if college administrators approved.

That’s not, of course, how the First Amendment works. Luckily Ivette Salazar had, in addition to the courage of her convictions, assistance from FIRE, the Foundation for Individual Rights in Education, a campus-speech-rights advocacy group that helped her to mount a court challenge to ensure that she and her classmates, whatever their views, are able to exercise their rights on campus. After Salazar filed a lawsuit against Joliet Junior College in January of 2018, the college agreed to policy changes to better protect students’ free speech rights. On April 18, 2018 Salazar and Joliet Junior College announced that they had reached a settlement agreement to end the lawsuit.

FIRE, which was founded in 1999, is a stridently nonpartisan advocate for free speech protections and due process, especially on college campuses whose educational mission should allow for the free exchange of ideas. In addition to assisting legal challenges like the one at Joliet, FIRE works to empower and educate students and professors to ensure that their colleges and universities take free speech rights into account when they craft campus policies and set expectations for community behavior.

According to Bridget Glackin, FIRE’s director of development, this isn’t always the easiest task. “People don’t necessarily understand the value of free expression and its significance not only to the academy, but also to our democracy,” she says. To counter that trend, FIRE’s leadership realized that a suite of projects beyond the organization’s regular work would be necessary. They named the new initiative SOAR — Speech, Outreach, Advocacy and Research — and secured support for it from the John Templeton Foundation.

Many of the current limitations on student speech that FIRE has encountered have to do with often well-intentioned efforts by administrators to maintain what they believe is a ‘safe’ campus environment for all students through the creation of speech codes or ad-hoc policies that limit offensive speech. Part of FIRE’s work through SOAR will involve collecting improved psychological data about things like trigger warnings, safe spaces, and microaggressions. “We’re trying to understand from a scholarly point of view what those things are and what they mean for the current arguments that we’re having about free expression on campus,” Glackin says.

The mobilization component of SOAR involves outreach to a wide range of FIRE’s constituencies, from high school students preparing for college to professors who worry that campus policies may chafe against cherished notions of academic freedom, to alumni who may not be aware of how campus environments have changed in recent decades (FIRE has a new activism portal that allows alumni to easily contact their alma maters to voice concerns about campus policies limiting free speech).

Glackin’s colleague Peter Bonilla, who manages most of SOAR’s on-the-ground efforts, says that although campus speech debates are at times portrayed as battles between feel-good progressivism and more blunt conservative or libertarian viewpoints, the actual cases where free speech rights come into play can vary tremendously. “What might be popular on one campus might be toxic or very controversial on another,” he says. “It really is important that we defend those rights on a truly non-partisan basis, without regard to the politics of the speakers. What we’re doing with SOAR is certainly following in that tradition.”

“We’re trying to show students that once you give someone the power to subjectively decide who does and doesn’t get to speak, that’s a threat to all expression including their own,” Bonilla says. “Students and faculty may not think there’s much wrong so long as it’s not their speech being censored or it’s not their due process rights that are being trampled on, but allowing that kind of arbitrariness in the system just makes it that much easier one day for your speech or your rights to be the ones being trampled.”

Learn more about Ivette Salazar’s story at the FIRE website.

See the results of one of SOAR’s initial student polling projects, gathering opinions on First Amendment rights and self-censorship.