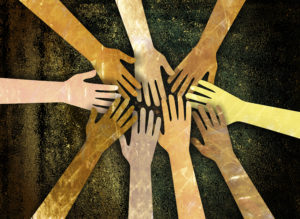 Scholars have described humans’ proclivity for cooperation as “a spectacular evolutionary anomaly,” a remark that could characterize the human species more broadly. We work with those outside of our immediate family to avoid danger, pool resources, and construct tools and technologies of staggering complexity. We self-select into groups based on cultural identities instead of genetic proximity, a characteristic that would seem to run against every evolutionary grain.

The list of traits that render humans unique among members of the animal kingdom is long. But what are the reasons for that uniqueness? And how did that uniqueness emerge over time? Is it possible to give an evolutionary account of the way human beings developed so many traits that so strongly distinguish us from other animals?

“We have to bring together ecology, behavior, genetics — all of these different approaches — to come to a holistic explanation,” says William Kimbel, director of the Institute of Human Origins (IHO) at Arizona State University. “It can’t be something that says, ‘I’ve found it, it’s language.’ That’s almost too obvious to be true.”

Kimbel and his colleagues have been pursuing that holistic explanation, through work funded by a three-year grant from the John Templeton Foundation. The grant, awarded in 2014, funds 11 interdisciplinary research projects under an umbrella project entitled “Evolutionary Foundations of Human Uniqueness: Recovering Patterns of Cognition, Cumulative Culture,  and Cooperation.” Collectively, the projects have tapped the expertise of 45 professors, graduate students, and postdoctoral researchers, from archaeologists to earth scientists to behavioral ecologists.

As its subtitle indicates, the 11 projects explore three different characteristics that the research team hypothesizes are fundamental to human uniqueness:

The research, which began in May 2014, has so far resulted in over thirty published papers exploring different facets of these topics. In one — “The Foundations of the Human Cultural Niche,” published in Nature Communications — Arizona State University researchers Maxime Derex and Robert Boyd outlined a virtual problem-solving experiment, involving human actors and automated learning bots, testing whether individuals working in isolation could learn as quickly as those in groups.

Both groups played a computer game that involved creating increasingly complex “totem poles.” The group with players who were allowed to observe other participants built their poles faster than individuals who had to go it alone. The experiment, Derex and Boyd wrote in Nature Communications, “provides the ﬁrst empirical evidence that people working in groups are able to accumulate information and develop artefacts that are too complex for any isolated individual to invent during the same period.”

Researchers are investigating another basic, crucial question: When did these signal characteristics emerge? And in what order? “Is it stepwise? Is it concerted?” Kimbel asks. For example, it has been a long-standing question in evolutionary biology how cooperation beyond those genetically related could evolve. Through an ethnographic study of four neighboring groups in Kenya, ASU researchers have found strong support for the long-contested model of “cultural group selection,” which proposes that individuals in a group are more willing to help each other if it brings a competitive advantage to the group overall.

Findings from the project may reframe the whole human story — situating it in what scientists call “deep time.” Project researchers working in the Cape of Good Hope in South Africa have located evidence of multi-part tools and ochre, a natural pigment used by early humans to paint bodies and other objects, which suggest that these cumulative cultural behaviors existed more than 100,000 years earlier than archaeologists had previously thought.

Where will all this research take us? Among other things, it will take us close to answering the sorts of questions that humans uniquely ask.

“Humans have an innate curiosity about our origins,” Kimbel says, “and it not only provides a bond for all humans on the planet, it provides a bond with the rest of the tree of life. It is an incredibly humbling lesson.”