Consciousness and creativity in the Neolithic at Çatalhöyük, Turkey 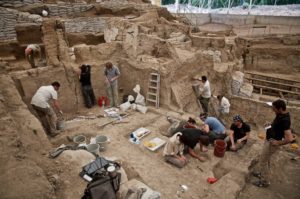 An excavation team working at Çatalhöyük in 2015 © Çatalhöyük

Around nine thousand years ago, a group of people founded a settlement in a low wetland area in what is now central Turkey. They built a cluster of rectangular clay brick homes with adjoining walls and entries through their roofs. Their homes had built-in ovens and white plastered interior walls decorated with red geometric murals and with the mounted horns of bulls. As in many ancient settlements, residents over the generations built new homes directly on the remains of older ones, increasing the size of the mound. After several centuries, the center of settlement shifted to another nearby site, and by around 5700 B.C., the settlement had largely dispersed. The area’s climate grew drier, preserving the  compacted remains of the proto-city from erosion.

Today the remains of the settlement, now called Çatalhöyük, are considered one of the most detailed and important records left by humans in the Neolithic era — roughly 9000-5000 B.C. (after the development of agriculture but before metallurgy). Çatalhöyük was first excavated by British archaeologists beginning in the 1960s before being temporarily abandoned. New excavations began in the early 1990s, led by Stanford University’s Ian Hodder with a team of dozens of U.S., Turkish, and international researchers painstakingly examining the site to understand more about the lives of the people who built it.

“Our aim has been always to try to understand why so many people came together in a very dense settlement and produced this very elaborate symbolism and art,” Hodder says. In that context, Çatalhöyük also became a perfect place to test a theory advanced by a group of cognitive archaeologists — that the Neolithic era was a time of swift evolutions, not just for human technology or culture, but for human cognition itself. According to the theory, human minds in the Neolithic era became capable of new levels of abstract thought, creativity, and individual identity.

THE LIVING AND THE DEAD

It’s a daunting task to determine how people thought eight thousand years ago based solely on physical evidence. “As you get societies that are larger and involve more control and administration and management, it’s expected that there would be abstract symbols that would come into play,” Hodder says. “There was no writing or numbers at this point, but one hypothesis is that there would be tokens or symbols that had some abstract meaning that could be used for measurement or accounting. So we have been looking for these at Çatalhöyük.”

Creativity, meanwhile, can be assessed by looking at the pace of innovation, whether of new technologies or new ways of using abstract symbols in art. Compact settlements and expanding trade networks can account for some of this growth of new ideas, but others might be a sign of evolving cognitive abilities.

“Many cognitive archaeologists have argued that in early time periods, there is not a strong sense of an integrated separate individual self,” Hodder says. “The self is seen as much more integrated with other people and with the natural world around it.” Hodder notes that sites like Çatalhöyük can offer significant physical clues about people’s senses of individuality, in the form of personal adornments and especially in the ways that the community treated its dead. (In addition to being a living settlement, Çatalhöyük was also a necropolis, with the dead commonly being buried beneath the floors of its residents’ homes).

In July of 2017, Hodder gathered a group of interested archaeologists and cognitive scientists in Cambridge, England to consider whether Çatalhöyük’s stratified layers indeed showed that significant cognitive changes were underway. Weighed in the balance, though, Hodder and his colleagues found that their hypothesis for Neolithic uniqueness didn’t hold up. In part this was due to what a patent attorney would call prior art: “Many of these characteristics seem to have been present in earlier time periods, in the Paleolithic,” Hodder says. “There were contexts then when you do have very strong sense of individual separate identities and an enormous amount of creativity and abstract thought.”

Furthermore, findings from Çatalhöyük suggest that it may not just be that the expected burst of cognitive evolution happened in an earlier human era, but that the nature of cognitive evolution itself may be much less straightforward. In funerary practices, notions of a highly individualized self at Çatalhöyük seem to have actually become less defined over time. In the settlement’s early eras, the body of a dead person tended to be treated as indivisible, which is taken as a sign of a heightened sense of individuality. By later eras, though, the people of Çatalhöyük treated their dead more as interchangeable members of a broader collective culture. “They separated skulls and other parts from bodies, disarticulated them and kept them for a long time, exchanging them and moving them around,” Hodder says. “What we see at Çatalhöyük is that the individual body is more important earlier on in the sequence and that gradually through time it becomes more and more disarticulated and more and more divisible. That’s the opposite of what was expected.”

Rather than being something that was acquired over time, Hodder thinks that humans may have had the potential for abstraction, creativity, and individuality well before the Neolithic — perhaps for as long as we’ve been Homo sapiens. “From the archaeological evidence, it seems that the mind has always had the same set of potentials, but in different contexts the mind works differently,” Hodder says.

The findings from Çatalhöyük may lend greater credence to a strain of cognitive archaeology that talks about distributed cognition — thought that takes place not just in the brain but in concert with cultural artifacts ranging from language and tools to religious symbolism. “As you move into the Neolithic you get a new world in which you do have to do things differently,” Hodder says. But it’s not the case that there’s a change in what the human brain is capable of. “It’s just that your mind is adapting or responding to the world around it.”

Learn more about Ian Hodder’s research and the ongoing excavations at Çatalhöyük.