Chance, Necessity, and the Origins of Life 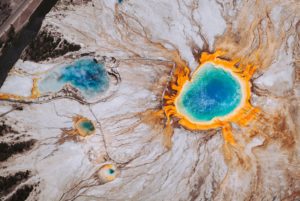 Our planet teems with life in even the most improbable places such as deep caves, undersea vents, or acidic hot springs. But is Earth the norm in the universe or the exception? Scientific and philosophical discourse on the prospects for life beyond Earth has long tended to gravitate towards two poles: on the one hand, viewing life on this planet as a sign of a cosmic imperative; or on the other, as a fluke unlikely to have been repeated anywhere else. For Robert Hazen, an astrobiologist and mineralogist based at the Carnegie Institution for Science in Washington, D.C., neither pole offers a satisfying paradigm. Instead, Hazen and a group of colleagues are applying a new set of statistical methodologies to map the continuum of probabilities for the chemical reactions related to life’s origin — giving insights into how and where to look for evidence of life outside of Earth’s bounds.

Hazen believes that to calculate the odds of life’s chemistry, mineralogy is a good place to start. There are millions of known organic compounds but only around 5,500 known mineral species (so defined by their chemical composition and crystal structure — the term ‘species’ is a holdover from Carl Linnaeus’ genus-species system of classifying animals, vegetables, and minerals).

“We already have vast databases of minerals, their localities, and the probabilities of their forming,” Hazen says. It turns out that Earth’s known minerals fit a frequency distribution pattern common in nature — a descending set of ratios from the most common to the most rare. Modeling the tail end of this frequency distribution allowed Hazen and his colleagues, including Purdue University Northwest statistics professor Grethe Hystad, to predict that there should be around 4,000 undiscovered minerals that have been created at some point, somewhere on Earth. Every mineral is the end result of a chemical reaction, but mineral surfaces are also the sites of most other chemical reactions. So mapping the distribution of minerals on a planet provides a sense of the distribution of chemical reactions, from the most common to the most rare. “It’s basically doing a back-of-the-envelope calculation of how many chemical reactions an earthlike planet can perform,” Hazen says.

Many investigations into the beginnings of life involve recreating the conditions of early Earth in the lab to see whether whether key precursor chemicals can develop. “Imagine a chemical reaction only happens once every 1049 times you try it,” Hazen says. “It could be something that’s absolutely inevitable on Earth, but something you will never discover in a laboratory experiment and it’s simply because Earth has such combinatorial power, combining the surface area and time in which you can do reactions. Things that are inevitable on an Earth-like planet may be almost impossible in the lab.”

Carol Cleland, a philosopher of science at the University of Colorado at Boulder and one of Hazen’s co-investigators, likes to say that that the search for bioactivity on other planets requires scientists to be prepared to recognize “life as we don’t know it.” “We expect that if there is a living system, it’s going to have a certain function,” Hazen says, “using energy to make molecules that will help it to make copies of itself.” But on other worlds such life may take very different forms in its specific chemistry. That’s why frequency spectrum analysis has the potential to help astrobiologists look for signs of life on newly discovered exoplanets: even if the basic chemistry is different, the frequency distribution of chemicals might provide a signature unique to biological systems — “something very deep and fundamental about the way molecules are distributed in living systems versus non-living systems,” Hazen says.

Such analysis could easily be applied to data from upcoming missions to Mars or to Saturn’s moon Titan. Even if no signs of present life are found, frequency analysis of their surface environments might indicate the former presence of life. Closer to home, Hazen has helped researchers at all levels to adapt those techniques to invigorate earthbound mineralogy — he even worked for two and a half years with a middle school student, Cadence Boucher, to use the techniques to compare network analysis predictions for the diversity of minerals in Virginia with the information in standard geophysical maps. (Last year the 11-year-old Boucher presented her results to the American Geophysical Union).

Hazen’s mineral insights may have direct implications for astrobiology, but they also hint at new and useful ways for understanding and comparing the underlying order of very different realms. “These frequency spectra that we see apply to so many things,” Hazen says. “They apply to minerals and they apply to molecules but they also apply to the populations of cities or even the distribution of words in a book.”

“The ecology of minerals is is almost identical mathematically to the ecology of biological species,” Hazen continues. “Why is that? What is the underlying reasons for that? I think that the John Templeton Foundation allows us to explore this in a way that other foundations and funding agencies simply do not. It’s a it’s a real privilege to be able to be part of that.”

Learn more about Robert Hazen’s work at the Carnegie Institution for Science and the Deep Carbon Observatory.

Read the abstract of middle schooler Cadence Boucher’s collaboration with Hazen on mineral distribution in Virginia.