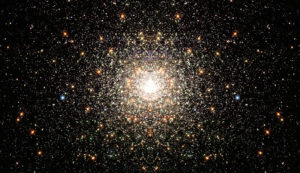 We live in a perfectly imperfect universe. The latest findings of cosmology tell us that our universe, like a good pancake batter, has matter and energy distributed in a way that is neither too smooth nor too lumpy. Without a high level of uniformity, all would be black holes, but with complete uniformity, the result would be, says cosmologist Luke Barnes, “a perfectly mathematically lovely universe — with no one in it.”

Barnes, who has recently taken a new position at Western Sydney University, specializes in creating simulations of alternate universes to see how space and time might have unfolded when the laws and constants differ from those in our own universe. In a series of forthcoming simulations, Barnes and his collaborators hope to untangle how symmetries and near-symmetries in the laws of physics affect the qualities of our own universe — and the smoothness or lumpiness of other potential universes.

(NOT SO) FEARFUL SYMMETRIES

The types of symmetries Barnes is investigating relate to the interactions of particles across space and time. Some are perfect symmetries like electric charge, which is always conserved and zeroes out when you sum the relevant quantities before and after an interaction. Other symmetries appear to be perfect under normal circumstances but diverge in extreme conditions. Still other symmetries break down entirely in certain circumstances: “At very high energies certain particles behave in ways that are perfectly symmetric, but as the universe cools, they start to behave differently and we then find strong asymmetries,” Barnes says.

Time, meanwhile, can behave symmetrically at microscopic levels (the same physical properties can apply whether time runs forward or backward) but seems to be highly asymmetric at larger scales: “If you drop an egg and it splatters, and then you run the video backwards you see a process that never happens,” Barnes says. “You see that there’s something really significant about the way time goes in our universe.”

To construct and run his simulations, Barnes relies on collaborators including the Sydney University’s Geraint Lewis (co-author of their Cambridge University Press book A Fortunate Universe: Life in a Finely Tuned Cosmos), Pascal Elahi from the University of Western Australia, and Richard Bower and Jaime Salcido at Durham University in the United Kingdom. Barnes anticipates running ten or more different simulations, each of which will take two weeks of supercomputing time. The scope of the simulation is calibrated to match previous simulations that Barnes has conducted, including a control simulation run with our own universe’s physical properties.

Each run of the simulation results in a wealth of data that then must be explored in a ways that are similar to astronomer combing through data from real-world observations.

“One of the first things we do when we have a simulation set is to look for clumps of structure to determine where the dense bits are and where the voids are, and in particular to look for any object that is collapsed and bound together by its own gravity — that’s where you’re going to find a galaxy,” Barnes says.

Part of the goal of running models of the universe with different parameters is to find conditions under which absolutely nothing happens. For his previous project, Barnes attempted to modulate the cosmological constant to eliminate the structure of the resulting universe, only to find that, even with a cosmological constant 300 times larger than the one for our universe, “we still weren’t quite killing it off,” Barnes says. “So we haven’t quite reached the point of having a totally boring simulation that does absolutely nothing.”

COSMOLOGY AT THE ANTIPODES

Barnes thinks his new post at Western Sydney will be a fertile environment for further work on both the symmetry simulations and the next phases of his career. In addition to his simulation work, Barnes and his colleagues are involved in the Australia-based Evolutionary Map of the Universe project (“with the convenient Australian acronym EMU,” he notes), which aims to chart tens of millions of previously unmeasured radio sources in the sky in an effort to understand how stars and galaxies formed and evolved. At Western Sydney, Barnes says, “we hope to build a group doing interesting simulation work, tapping into our large student body and our expertise in computing, and drawing all that over to work in cosmology and astrophysics.”