A public symposium on the prospects for civil discussion 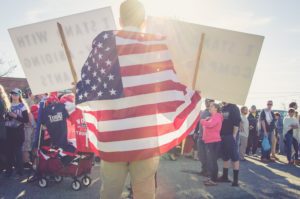 In the age of the internet comment, it gets harder and harder to imagine meaningful dialogue between people who disagree about topics as deeply held and divisive as faith and politics. On April 25 in Hartford, Connecticut a trio of speakers with divergent backgrounds but a common interest in revitalizing civic discourse will make the case for — and chart paths towards — just such conversations.

At the event titled “Talking About Faith and Politics: Navigating Our Differences with Conviction and Humility,” former presidential advisor David Gergen, interfaith youth activist Eboo Patel and dialogue facilitator Rabbi Melissa Weintraub will share thoughts on how to help people talk about faith — including its political dimensions — in ways that remain rooted in conviction without becoming arrogant.

Philosopher Michael Lynch heads the University of Connecticut’s Humanities Institute, whose Humility & Conviction in Public Life project is organizing the event as part of a broad offering of research and outreach programs around a topic crucial for such discourse: intellectual humility. According to Lynch, an intellectual humble person is, as he put it, “the opposite of being a know-it-all.” Instead, Lynch says, “the person who’s intellectually humble is precisely the person who thinks that, although they may know a lot, they still can learn from what other people, even those who disagree with them, bring to the table.”

Sometimes that table can be quite literal: “If you think about the proverbial Thanksgiving dinner conversation,” Lynch says, “you’ll have people from the same family and often of the same faith disagreeing about how they should navigate controversial issues. Thinking about this topic brings up this bigger question of how we know when we need to dig in in defense of our convictions, and when we need to be more humble about them.”

The event will be held in Hartford’s historic Wadsworth Atheneum, the oldest continuously-operating public art museum in the United States and the host of Humility & Conviction in Public Life’s ongoing “Encounters” series, which supports community discussions designed to present topics ranging from the Bill of Rights to alchemy. For the alchemy encounter, participants used medieval alchemical texts as a jumping-off point for a discussion about the differences between “science” and “belief.”

“The Atheneum is a grand space,” Lynch says, “and being able to partner with an institution that has a distinguished, national reputation for intellectually serious discussion is a great opportunity for the project to showcase its public face.”

The speakers for the April 25 event were selected for their collective experiences in navigating very different aspects of faith and politics. Gergen has served in four presidential administrations and currently co-directs the Center for Public Leadership at Harvard’s Kennedy School of Government. Patel is a former Rhodes scholar who founded the Interfaith Youth Core and served as a member of President Obama’s Advisory Council on Faith-Based Neighborhood Partnerships. Weintraub is the co-founder of Resetting the Table, an organization that works to foster meaningful dialogue across political divides among American Jews.

Humility & Conviction in Public Life is a wide ranging three-and-a-half-year project, funded by a $5.76 million-dollar grant from the John Templeton Foundation. In addition to public events like the ones at the Wadsworth Atheneum, the project supports subgrants to journalists, artists, and academic researchers to investigate both the nature intellectual humility and tactics to help us internalize it. At present, ten global research teams are working under the grant, investigating questions such as whether online comments sections can be redesigned to promote intellectually humble interactions. One of the teams produces a blog, Open for Debate, whose posts explore the changing nature of public discourse, looking at topics like the effects of closed-mindedness in classroom settings and the recent rise of “fake news.”

The project also produces a podcast, Why We Argue, featuring interviews with political scientists, philosophers, journalists, historians, politicians, and citizens about the highlights and low points of present-day political discourse.

On April 6 and 7 Humility & Conviction in Public Life is also hosting an academic gathering, open to the public, on Political Polarization and Epistemic Arrogance. “It will be a workshop bringing together some of the leading psychologists and philosophers in the world to talk about political polarization and arrogance,” Lynch says. “It’s a way for us to highlight some of the research that’s coming out — but most importantly, to get those researchers to talk to each other so they can generate solutions to some of these political problems.”

For Lynch, understanding and learning how to foster intellectual humility is crucial to maintaining and improving a thriving democratic society. “Democracy strives to meet two ideals,” he says. “The first is that citizens of a democracy need to have conviction — they need to stand for certain principles. But democracies also need their citizens to be open-minded and willing to talk about each other’s convictions — they need to be able to learn from each other.”

Register to attend the Political Polarization and Epistemic Arrogance workshop on April 6-7.