An Evening Exploring the Unknown

Astrophysics, Anthropology, and Journalism in Conversation at the Atlantic Festival 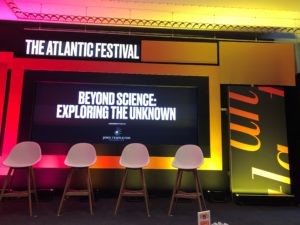 Washington, D.C. — Science is an incredible engine of discovery — but when scientists talk to the public, they often emphasize the results more than the humbling process of exploration and experimentation that leads to discovery. That was one of the take-aways from “Beyond Science: Exploring the Unknown,” a wide-ranging conversation sponsored by the John Templeton Foundation that took place September 26 as part of the closing evening of the three-day Atlantic Festival in downtown Washington, D.C.

Ross Andersen, a science journalist and deputy editor at The Atlantic magazine, moderated the discussion between two astrophysicists — Harvard’s Avi Loeb and Yale’s Priyamvada Natarajan — and genetic anthropologist Jada Benn Torres of Vanderbilt University. The common thread of the three scientists’ fields of work is the question of origins, on both the universal and the human scale. Why is there something rather than nothing, and when and how did humanity as we know it come to be?

“The one thing you learn from astronomy is a sense of modesty,” Loeb said, parrying the question of why the universe exists at all. “There are so many planets out there, and I don’t think we’re the only kids on the block — I would like to ask an intelligent civilization that’s had a billion years to think about it.” Loeb said he prefers to worry about the universe’s future rather than its past, noting that because of the universe’s accelerating expansion, parts of the universe that we can now receive information from will eventually become unreachable, even as the still-visible stars begin to die out. “It will be a very lonely future,” he noted wistfully. 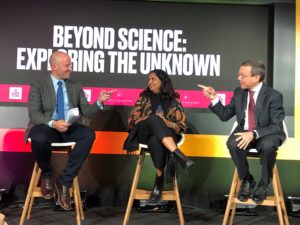 Our universe may be on a course to petering out, but is it the only one? Andersen asked both astrophysicists for their current take on the current state of multiverse theory. Loeb said he was skeptical that the theory would ever be provable — “The duty of physics is to explain the one reality we live in,” he said. “I would hate to see a retreat to speculative ideas that cannot be tested.”

“I’m a little more forgiving,” Natarajan countered. “I believe in the multiverse — it’s a belief, it’s not scientific, but I like the idea. It solves some of the really thorny problems — not only of inflation, but also the fine-tuning problem, of why there are just six or seven numbers that define the past, present, and future of the universe. We wouldn’t be here if these numbers were even slightly off.” A multiverse could explain that particularity by saying there are infinite universes encompassing infinite possible outcomes, and we just happen to be observing the one that is finely tuned. “Besides,” Natarajan said, “I like the idea that there could be another Priya in some other universe who is an architect or something.”

Shifting back to our particular existence in this particular universe, Andersen asked Jada Benn Torres about how recent discoveries in human genetics — including an explosion of sequenced genomes both of modern humans and of ancestral species like Neanderthals and Denisovians — are changing our notion of human origins. “In the ten years that I’ve been a professional anthropologist, I’ve seen a lot of the ideas about where humans come from completely overturned,” Benn Torres said. One particular strand of these new findings has been one of separation and coming back together. Rather than simply branching out, the human story involves far more diverging and then returning, with populations leaving, evolving, and then rejoining, and with early Homo sapiens having offspring with members of other human communities. 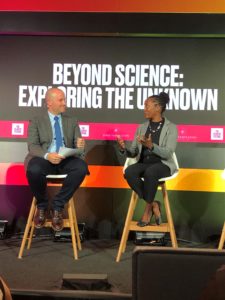 Andersen asked her whether those findings were expanding our definition of humanity beyond Homo sapiens. Benn Torres thinks so: “If we exchanged genes, if we made babies, I would like to think you’d think of them as human,” she said.

But Benn Torres also cautioned that her own work investigating the genetic descent of indigenous populations in the Caribbean has has underscored the importance of using the new tools judiciously. “Genetics has the potential to tell a story, but it’s also very important to remember if the community wants that story told. In the Caribbean there are these narratives of extinction, that shortly after Columbus arrived the native peoples were decimated. What we’re seeing now in the DNA is that’s not the case. Historically, people didn’t identify as indigenous because it was seen to be bad. Now people are more readily accepting this, and for them these genetic technologies allow them to begin to explore a history that was erased.” 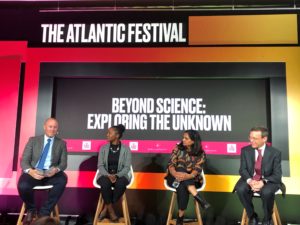 The opportunities and perils of communicating science to the general public was a key theme among all the speakers and among questions from the audience. Asked how scientists could communicate big questions and big discoveries in a media landscape relentlessly focused on ephemeral news and trends, Loeb ventured that part of the blame lies with the scientists themselves, who often treat the public no different than students in their class, receiving the established truths rather than describing the process and uncertainties under which scientists operate. “If we just show the final product, then the public will view science as an occupation of the elite, and will not necessarily believe it,” Loeb said. That’s a loss not just for the general public but for the scientists themselves, who can benefit from thinking about how to explain what they do to non-specialists: “Many of my best ideas came as a result of discussions with laypeople,” Loeb said.

Natarajan agreed. “The process of science is kind of messy, but we’ve presented a very sanitized view of science by just focusing on the final result.” So scientists need to do a much better sense of conveying the uncertainty and provisionality of scientific work. “This provisionality isn’t so fragile that tomorrow suddenly gravity could be all wrong,” Natarajan said.  “It says that to the best of our knowledge today, this is where we’re at.”