Since its inception in 1972, the Templeton Prize has usually been awarded in London, originally in private ceremonies at Buckingham Palace and more recently at the Church of St. Martin-in-the-Fields on Trafalgar Square. On Sunday night, the ceremony embraced a new and different location — Chicago’s Field Museum of Natural History — in a ceremony tailored to the life and career of its recipient, philosopher Alvin Plantinga.

Chicago is a few hours’ drive from Calvin College in Grand Rapids, Michigan, where Plantinga earned his undergraduate degree and spent the formative early years of his academic career, and from Notre Dame University in South Bend, Indiana, where he taught for 28 years until his retirement in 2010. The ceremony drew hundreds of family members, former philosophy students, and alumni, in addition to friends of the John Templeton Foundation and distinguished religious and academic leaders.

The ceremony aimed to honor both Plantinga the scholar and Plantinga the man in a way that reflected his own distinctive combination of warmth and precision. A pair of short films explored Plantinga’s legacy in twentieth-century philosophy — with archival photos that elicited laughter reminiscent of a family reunion slide-show — and, through interviews with philosophers around the world, his ongoing influence on philosophy’s future.

WHAT PLANTINGA MADE POSSIBLE

The ceremony was anchored by speeches from three philosophers, from varied traditions, who offered reflections on Plantinga’s influence in the practice of theology from a starting point of faith. In a soft-spoken discourse, Islamic scholar Sheikh Hamza Yusuf framed Plantinga’s influence in terms of his own tradition’s emphasis on metaphysics, the rules of justifiable evidence and the crucial why questions that undergird all philosophy — and ended, in the tradition of Islamic scholarly celebrations, with a poem in Plantinga’s honor, composed in iambic tetrameter especially for the occasion.

For his part, the Jewish philosopher and theologian Yoram Hazony, who is president of the Herzl Institute in Jerusalem, cast Plantinga’s influence and importance in more pugnacious terms. Citing Plantinga’s seminal 1984 “Advice to Christian Philosophers” as an important rallying cry for philosophers to consider their own religious views as both valid and valuable for philosophical work, Hazony quoted the Biblical prophet Joel in alternating English and Hebrew, extolling Plantinga as “a great captain in the armies of God.”

Meghan Sullivan, a rising star in philosophy who was recently promoted to a full professorship at Notre Dame, offered her own reflections of how reading Plantinga had affected her in different phases of her own career: as an undergraduate she had been attracted to Plantinga’s clear arguments, as a graduate student to his writing voice and its ability to mix exacting philosophical rigor with plain-spoken wit, and as a young Ph.D. to Plantinga’s courage in integrating faith into his philosophical work and encouraging others to do likewise.

Today, Sullivan said, she was most struck by Plantinga’s sense of wonder. Wonder implies an openness to discovery and unfolds possibilities for faith and reason to strengthen each other. Faith, she said, feeds our reason with questions to entertain, while reason gives us the tools to entertain them. And Plantinga worked powerfully to strengthen and clarify the role of religious belief as a source for mainstream philosophy.

“THEN SINGS MY SOUL…” 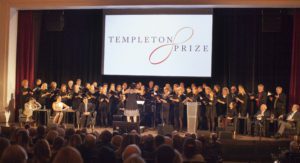 Interwoven between these spoken celebrations of Plantinga’s work and influence were four musical pieces that served to frame and orient the celebration. Leon Plantinga, an emeritus professor of music at Yale University — and the honoree’s younger brother — performed a movement from a Beethoven piano sonata. Three times the nationally recognized Calvin College Alumni Choir filed onto the stage behind the seated presenters and filled the Field Museum auditorium with their resonant voices. The choir sang settings of an ancient Christian hymn (“Caritas et Amor”), a poem by St. Francis of Assisi (“All Creatures of our God and King”), and, at the very conclusion of the program, “How Great thou Art” — a Swedish poem that found its way, through Russian and English translations, into a becoming Billy Graham Crusade staple and one of Alvin Plantinga’s personal favorites.

As the choir sang, Plantinga sat at the righthand edge of the stage, canted in his club chair into a Lincoln-esque profile as he took in the vocal harmonies. In the audience, the crowd sat rapt beneath the starburst chandeliers in the Greek Revival hall.

A TREE OF LIFE MEDALLION

For decades the Templeton Prize was presented by Prince Philip, the Duke of Edinburgh and consort to Queen Elizabeth II. Since 2012 the prize has been presented by Lord Brian Griffiths of Fforestfach, who was a personal friend of both Sir John Templeton and his son, Dr. John M. Templeton, Jr.

Introducing the prize, Lord Griffiths spoke warmly of both father and son, and of the work in religious progress fostered by the prize and foundations that bear the Templeton name — of gathering new and vital spiritual information, and of fostering a curious, humble approach to science, philosophy, and theology. 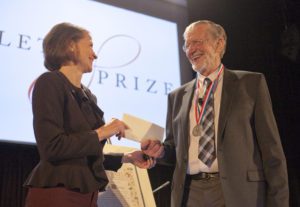 Together with Heather Templeton Dill, Sir John Templeton’s granddaughter and the current president of the John Templeton Foundation, Lord Griffiths presented the three elements of the Templeton Prize — an illuminated scroll featuring illustrations of key motifs of Plantinga’s life, from the Teton Range (many of whose peaks he has climbed) to the seals of Calvin College and Notre Dame; a gold medallion featuring a Tree of Life motif with branches interlaced to symbolize the continuity of life and the connection of creation; and a check for £1.1 million pounds sterling.

With the Tree of Life medallion around his neck, Alvin Plantinga then took the podium. In his stentorian voice, Plantinga offered a brief outline, peppered with self-deprecating wit, of what he felt was his greatest contribution to the philosophical discussion — a recognition that there are broad realms of beliefs that can be considered valid and warranted without the evidence that some beliefs necessarily demand.

It’s perfectly reasonable, Plantinga said, to expect external documentary evidence to validate a claim that George Washington was the first president. But you don’t need — and shouldn’t expect — a history book to tell you whether or not your leg itches. The same can be said of belief in God — far from being an impossible-to-verify non-starter, it is an itch that is in itself a valid starting point for further investigation. “It may be a small point,” Plantinga said in a closing so tightly turned it nearly felt abrupt, “but I think it’s important.” And with that dramatic understatement, the 2017 Templeton Prize Laureate returned to his seat for one more anthem, and one last ovation.