A Night for the Ages

The writer and physician Oliver Sacks once described 2019 Templeton Prize laureate Marcelo Gleiser as having “a spaciousness of mind large enough to embrace both primordial creation myths and the latest advances in contemporary astronomy and cosmology.” It would thus be difficult to think of a more fitting venue than the one where Gleiser received his prize on May 29 in the Egyptian Wing of New York’s Metropolitan Museum of Art.

Hundreds of attendees braved a heavy spring rainstorm to ascend the Met’s front steps and file past the colossal, nearly 4,000-year-old statue of a seated Middle Kingdom pharaoh, past mummies and amulets and arrestingly lifelike funerary paintings, and into the mid-20th-century Grace Rainey Rogers Auditorium, where the ceremony was held.

Like every Templeton Prize celebration, the evening’s program was tailored to the recipient’s achievements and passions. Gleiser helped to choose three musical selections that were played by the Dartmouth Symphony Orchestra: a movement from Mahler’s Symphony No. 5, an aria by Brazilian composer Heitor Villa-Lobos, and a section from Mozart’s “Jupiter” symphony. As Gleiser wrote in the program notes, “Mahler speaks to my heart and spirit, Villa-Lobos to my Brazilian roots, and Mozart to the precision and mystery of the cosmic harmony.” 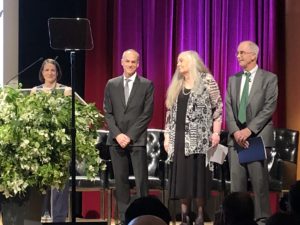 In her opening remarks, John Templeton Foundation president Heather Templeton Dill praised Gleiser’s work in presenting scientific inquiry as part of a larger spiritual expression of humanity’s need to embrace and investigate the unknown. “For Marcelo, this scientific impulse to endlessly explore mystery becomes a form of the spiritual impulse. Both are searching for meaning, purpose, and the answer to questions that belie easy answers,” she said.

“In his research, writing, and speaking, he has found a way to create a constructive engagement between the sciences and the humanities, and to propose a unifying vision rooted in an appreciation for humankind’s uniqueness in the cosmos.”

Gleiser’s gift for this sort of constructive engagement was embodied in the next speaker, essayist and novelist Marilynne Robinson, who sits on the board of Dartmouth’s Institute for Cross-Disciplinary Engagement, which was founded by Gleiser with funding from the John Templeton Foundation.

Robinson began by laying out the origins of the contemporary schism between science and metaphysics and lauded work like Gleiser’s to restore the links between the two crucial disciplines that are “two manifestations of one phenomenon, human wonder at human circumstance, from the earth we stand on to the dreams we dream, to our being as creatures in time,” Robinson said. “Marcelo Gleiser proposes that science approach the world with a wider sense of the ways in which reality is knowable, to enlist in its methods and effects the insights offered by compassion and also delight.”

The loftiest thoughts and statements require a place in which to be formed and to be presented. An eight-minute video produced by the Templeton Foundation traced Gleiser’s professional and imaginative arc, from his days as a boy fishing and looking at the stars from Rio de Janeiro’s Copacabana beach to his three decades teaching and doing cosmological research at Dartmouth.

Dartmouth president Philip Hanlon — himself a mathematician — praised Gleiser’s approach to the possibilities and the limitations of science. “Marcelo is a scientist — that’s a fact — but he also understands the limits of science. Einstein said, ‘The most beautiful thing we can explore is the mysterious.’ Marcelo believes that to his core,” Hanlon said.

Emanuel Lobo de Andrade from the Brazilian consulate took the podium to offer formal congratulations for Gleiser’s achievements. “In Brazil, Professor Gleiser has been a tremendous source of inspiration,” he said. 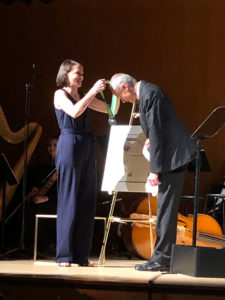 Gleiser then received his prize — an ornately decorated scroll and the Templeton Prize’s signature Tree of Life medallion, in this edition hung from a ribbon striped with the gold and green of the Brazilian flag. After a lengthy round of thanks to everyone in attendance, from family members to scientific colleagues to grade-school classmates from his youth in Rio, Gleiser began his remarks: “I want to talk a little bit tonight about our human disquietude,” he said. “We are very peculiar creatures because we have this urge to know and yet we are also limited in our knowledge.”

It is those kind of questions that drive new thoughts, and inspire humans to develop instruments — from telescopes to computers — that increase our ability to observe and learn from nature. “You can tell the history of astronomy and of science in general as the history of scientific instruments,” Gleiser said.

Gleiser noted with delight the coincidence that the prize ceremony fell on the 100th anniversary of one of the great triumphs of scientific measurement, when stellar observations taken during a solar eclipse in Brazil and the West African island of Principe provided the first visual evidence of Einstein’s theory of relativity. 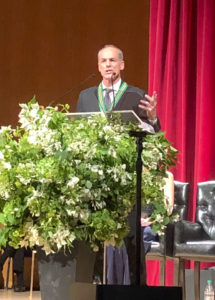 Gleiser closed with two of his other recent themes: of recapturing a sense of human uniqueness in the vastness of the universe, and of the imperative of what we should do with that uniqueness.

“There’s something very special about us humans in this planet because we are the creatures that are able to understand or try to understand our origins. We are self-aware molecular machines capable of wonder and of awe and that to me is something that should be celebrated every day,” Gleiser said. “We need to unite as a species so that we have a future, to leave the world to future generations as a better place than we found it. That to me is the moral imperative of our time.”

Learn more about the Institute for Cross-Disciplinary Engagement at Dartmouth.

Watch video of the full ceremony.