Toward an affective science of religion: The emotional causes and consequences of religious belief

Do hard times drive people to seek solace in religion, or do they make it harder to believe in God? 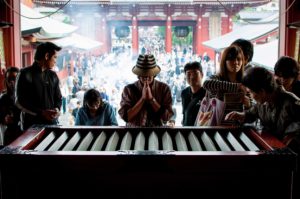 Sigmund Freud famously remarked that religion offers its adherents a refuge from the evils we encounter in the “over-mighty and pitiless forces of nature.” But for some, the reality of evil creates a barrier to the embrace of the divine. Italian writer and chemist Primo Levi explained that his internment in a Nazi concentration camp caused him to lose his faith and later proclaim that, “There is Auschwitz, and so there cannot be God.” Why, and how, do these confrontations with evil lead to such widely divergent reactions?

Ryan McKay, a psychologist and director of the Royal Holloway Morality and Beliefs Lab at the University of London, is keenly interested in the role of emotion and desire in religion. McKay believes that while psychologists of religion have tended to focus on cognitive aspects of religion such as knowledge, attention and memory, they have tended to neglect affective aspects like emotion. With co-investigators Jonathan Jong of Coventry University and Jamin Halberstadt of the University of Otago, New Zealand, McKay sought to investigate interactions between negative life events — including experimentally induced stress—and religious cognition. Their work was funded as part of the John Templeton Foundation’s “Gods in Minds” funding competition, which was designed to forge links in the fragmented interdisciplinary world of research into religious cognition. The goals of the initiative were both to increase cross-disciplinary awareness of existing lines of research and to make it easier for researchers to generate and test new hypotheses concerning how humans think about the supernatural.

According to McKay, previous studies on emotion and religion have important limitations in that they focus on relatively narrow range of types of experience and they overrepresent so-called WEIRD populations (i.e. Western, educated, industrialized, rich, and democratic). To begin to address these limitations, McKay and his team designed instruments that would capture information about negative life experiences and religiosity across a culturally and religiously diverse eight-nation sample.

Within that broader group, McKay reports that his team found that the number of negative life experiences individuals encountered showed positive (albeit small) correlations with supernatural belief and religious participation.

To complement the cross-cultural survey, McKay’s team also carried out several laboratory studies in an attempt to tease apart the causal pathways behind the correlations they had observed. Several studies looked at whether recalling negative life events would increase subjects’ implicit levels of belief more than recalling positive or neutral events. After initial results seemed to confirm the hypothesized link, the team made attempts to replicate the result, which have thus far been much more mixed. “It’s surprising and a little frustrating,” McKay admits, “but it demonstrates the importance of carefully replicating your initial findings before leaping to conclusions.”

McKay hopes that future experiments related to these topics can help us better understand the specific mechanisms by which negative experiences may increase religious belief, addressing questions such as: “Does increased belief offer a sense of comfort in the face of pain, or a sense of control in the face of uncertainty?” He also wonders whether another possibility, recommended by advocates of so-called Terror Management Theory, might suggest that fear of one’s mortality may be a prime link between negative experiences and turns towards religion.

And it may not be the negativity of these experiences that is the source of any observed effect. “Some of our other work suggests that positive emotional experiences can have effects similar to negative experience,” McKay says. “In that case it’s perhaps the intensity of emotional experience that’s the driver, rather than the valence per se.” Nature writ large — as well as human nature — can be harsh, but it can also be a source of awe, wonder and joy — attributes which might also drive us to seek out connection with the divine.

Learn more about the Morality and Beliefs Lab