Generous by nature: Need-based transfers and the origins of human cooperation

Giving without expecting repayment is not only more common than previously thought, it may also be more crucial for cultures to survive and flourish 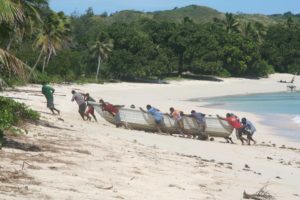 Among the Maasai people of southern Kenya and northern Tanzania, there is a special category of friendship known as osotua, from the word that means “umbilical cord.” Osotua relationships grow out of a sort of platonic courtship and, once formalized, bind people in mutual obligation to help one another in times of need. Osotua is what anthropologists call a “need-based” rather than “debt-based” system of transfer: one gives or receives help based on the relationship, not on the ability to eventually settle the debt.

Lee Cronk, a professor of anthropology at Rutgers University, began doing fieldwork among the Maasai in the 1980s. He had long been familiar with aspects of the osotua system, but wondered whether there was more to be learned about the origins and prevalence of osotua-style generosity and risk-pooling. After Cronk published a small study on osotua in 2007, he began an ongoing conversation with Athena Aktipis, a young psychologist with expertise on using agent-based simulations to test psychological theories. Out of those conversations, Cronk and Aktipis (who is now an assistant professor at Arizona State University) began to conceive of a larger project that would combine fieldwork, computational modeling, lab experiments, and public outreach to study human cooperation and generosity. In 2014 they found an enthusiastic funding partner with the John Templeton Foundation. “I’ve always prided myself on being able to do research on a shoestring, but if you are so lucky as to get a big grant like the one we got from Templeton, you can do so much more,” Cronk says. “To be able to be part of a team and build a team and share ideas every week was just a great experience.”

For Aktipis, the interdisciplinary nature of the project helped to sharpen each of its elements: “Finally we had the network and the resources to do this how it should be done,” she says, “where the computational modeling is informed by what we know from the field and the experiments are informed by what we’re finding in the models. I think that’s the only way that we’re really going to understand something as complex as cooperation and generosity.”

Cronk and Aktipis coordinated with anthropologists doing fieldwork across nine distinct sites — five in East Africa, two in the United States, one in Mongolia, and one in Fiji — to examine the prevalence and efficacy of osotua-style frameworks for need-based generosity. They found that such systems were indeed common, especially in settings where unpredictable risks made it impossible for people to withstand potential shocks on their own. To guard against biasing their survey by selecting cultures known for generosity, Cronk says they chose an allegedly stingy culture, the Ik people of northern Uganda, who had been the subject of a well-known 1972 ethnography that documented rampant patterns of selfishness to the point of cruelty during a time of extreme famine. Contrary to that stereotype, what the team’s researcher Cathryn Townsend found was that the present-day Ik displayed a strong ethic of generosity. “They think that sharing is essential to their way of life, and believe that there’s a supernatural punishment for those who don’t share,” Cronk says. When the Ik played a simple economic game to detect their willingness to share a windfall, their level of generosity was actually higher than the worldwide average results for the game.

A culture-wide calamity may explain the Ik’s struggles decades ago, but are there ways that systems of sharing can still function in times of widespread catastrophic need? In Fiji, anthropologist Matt Gervais documented how coastal villages worked to nurture connections with distant settlements so that if a cyclone destroyed one area it was likely that the support network would still be able to offer help. “They’ll have a local social support system in the village, but then they also know that there’s a village on the other side of the island,” Cronk says. “The larger your geographical area and the more people you can pull into them, then the less likely it is that everybody in the system is going to get hit simultaneously.”

Among cattle ranchers in southern Arizona, Cronk and Aktipis did direct research on mutual systems of self-aid. Cronk says that there were effectively two systems, one for sharing labor for predictable events, like branding or getting cattle to market, that was basically reciprocal. But in the case of unpredictable emergencies, “the ranchers just come over and they do the work and they don’t expect anything in repayment,” Cronk says. “They just they want to keep all the ranches in the community going because they need each other.”

When she first set out to build a simple agent-based computer simulation of the Maasai’s osotua system, Aktipis was shocked at just how much of an advantage it seemed to confer for both individuals and groups. “On the surface it seemed like, well, from an evolutionary perspective, why would you help others in need? But when I programmed the model and looked at the data and saw just how much of an increase in survival you got when you used the osotua rules, I realized there’s something real and interesting here,” she says.

Aktipis immediately set out to try to prove herself wrong. “As a scientist if you see something that’s really surprising and could be really profound, the first thing you should try to do is break it,” she jokes. So she began tweaking the parameters of the models, altering the environmental rules under which the simulated Maasai lived, adding or taking away disasters. She found that osotua was consistently the best cultural strategy.

Next, Aktipis set up simulations to compare the need-based osotua strategy to a more conventional debt-based approach. But Aktipis found that even coding a debt-based approach for real-world conditions proved incredibly complex. In simple economic games, it’s straightforward enough to cut off a stingy friend after a set number of turns. “But how do you translate this payback strategy to a realistic ecology as opposed to the make-believe world of the prisoner’s dilemma?” she asked. “When we actually coded it and compared it to need-based transfers, we were totally shocked. No matter what we did to the parameters, the need-based transfer strategy pretty much outperformed the account-keeping strategy. Having a partner that you can call upon in a time of need is more important for your survival than just having more cows.”

Cronk and Aktipis also devoted a portion of the project to lab experiments, in which people (rather than virtual agents) play resource-sharing games. Although mostly carried out in U.S. university settings, the games have also been adapted, where applicable, for fieldwork subjects to play. Some versions of the lab game are being used to explore resource visibility and cheater detection: if community members’ resources are visible to all, as in the case of the Maasai and their cattle, it is presumably easy to verify whether a person needs help or can give it. But does a need-based transfer system function the same way when the needs themselves are more hidden, as with monetary debt?

The project’s games have also become a form of outreach. Visitors to the Exploratorium, an interactive science museum located on San Francisco’s famed Embarcadero, can play The Survival Game, a version of the Maasai simulation developed by team member Hugh MacDonald, and learn first-hand how resource-sharing strategies can help both individuals and communities survive and thrive. In a museum hall full of stimulating exhibits, the generosity simulator has been a hit, engaging visitors for an average “hold time” of five to ten minutes, about five times longer the museum’s average. “Being able to watch people play it was one of the best experiences of my career,” Cronk says. “When you’re an academic you write and you teach your classes and maybe the students connect with it or maybe they don’t. But through that display, the lessons from the work on osotua were getting across to people — it’s really gratifying for me to think that people are understanding the logic of generosity towards those in need.”

Learn more about osotua and Cronk and Aktipis’s work at the Human Generosity Project website.