The Foundations of Fine-Tuning

Philosophy, physics, and the implications of an unlikely universe 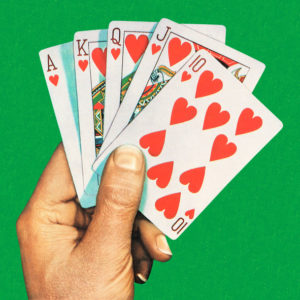 A woman enters a casino, sits down at a high-stakes poker table, and draws a royal flush. She cashes in her winnings, walks to the casino next door, and does the same thing. Then she goes to a third casino and draws a third royal flush. What is a dispassionate observer to make of this scenario? Is it merely a highly improbable occurrence (although no more improbable — just more lucrative — than drawing the same losing hand three times over)? Casinos may believe that in general one person in a thousand is a cheater while the rest play with random hands. But the fact of our player’s lucky streak should significantly shift the likelihood that the alternative ‘cheater’ hypothesis is correct.

John Hawthorne is a philosopher at USC who studies the intricacies of epistemology — the field that examines how we come to our beliefs, and when those beliefs are justified. In recent years, he’s been thinking about what a careful epistemologist might have to say about certain coincidences — some of which seem far more unlikely than a triple-royal-flush — that have recently been observed in particle physics and related fields. Most of these coincidences have to do with the very specific values of universal constants — the masses of subatomic particles, the strengths of atomic forces, or the value of a physical parameter known as the cosmological constant — which seem to be highly improbable from the perspective of physics, but upon whose precise values the entire possibility of a galaxy-filled, life-sustaining universe seems to hang.

A system with those types of constraints is said to be finely tuned, and the concept of fine-tuning on the cosmic scale has caused excitement and consternation in and beyond beyond the worlds of philosophy and physics. Is this fine-tuning an extraordinary coincidence, is it a proof that we live in a divinely created universe, or is it rather a sign that our improbable universe is part of a far larger multiverse containing a multitude of other universes ?

Because it gets at these sorts of high-stakes questions, fine-tuning theory has spurred numerous philosophical responses. Unfortunately, Hawthorne says, much of what has been produced is either empirically or philosophically uninformed. “There is a lot of writing that uses the unhelpful notion of ‘crying out for explanation,’” he says. A more careful epistemological response looks at these coincidences less as demanding explanation than as offering potentially useful information for rebalancing the odds of various competing hypotheses.

To correct those notions, philosophers need a better grasp of physics and physicists need a better understanding of which elements of fine-tuning are the most intriguing. For Hawthorne’s part, that means a three-way collaboration with philosophically-minded particle physicist Aron Wall (currently at Stanford but soon to take a permanent position at Cambridge University), and with another rising epistemologist, Yoaav Isaacs, who is currently Hawthorne’s postdoctoral fellow at USC.

“Some philosophers are finding fine-tuning all over the place,” says Hawthorne, “but one thing we’re trying to understand is why certain kinds of fine-tuning arguments are really pressing problems for physicists, but others aren’t.”

If one issue is understanding what does or doesn’t constitute fine-tuning in the first place, a related question is what exactly fine-tuning implies for competing theories about the universe’s nature and origin. “Philosophers tend to divide into those who think it’s an overwhelmingly powerful argument for some kind of theism and those who think that it’s a completely useless argument,” Hawthorne says. “But it’s important to realize that the truth is likely neither of those.”

It’s possible that fine-tuning might rule out a certain kind of single-universe atheistic naturalism, but even if it does so, Hawthorne cautions that it shouldn’t be seen to favor theism over every other atheistic hypothesis. The potential existence of a multiverse offers a non-theistic response to fine-tuning’s conundrums, and Hawthorne notes that there are also some lesser known naturalistic explanations that may require neither a god nor a multiverse to explain physics as we observe it. Still, he says, “to put it crudely, if you had several hypotheses and you knock one out,  that’s going to raise the probability of the others.”

The first major fruit of Hawthorne’s collaboration with Wall and Isaacs will be a book-length treatment of the philosophy and physics of fine-tuning, geared for a diverse academic audience. “The aim is to write something that’s going to be accessible to philosophy students and physics students,” Hawthorne says. “There’s not a lot that both groups know, so we have write in a way that doesn’t take much for granted.”

Hawthorne is hopeful that the work will make for both better philosophers and better physicists, yielding approaches and conclusions that are more nuanced, even if at the expense of some of fine-tuning theory’s initial buzz.

“In the ballpark of natural theology, fine-tuning is about the most interesting game in town right now,” Hawthorne says. “I really want to understand every drop of what can be understood, given the the tools that I’ve got at my disposal.”