New Generation of Leaders for the Russian Orthodox Church 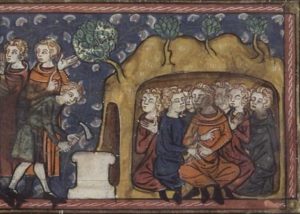 There’s a traditional Russian Orthodox icon that depicts the Seven Youths of Ephesus, a legendary group of persecuted Christians who were sealed inside a cave in Turkey in the third century A.D. but emerged 300 years later, following a miraculous slumber, into a different world. During eight decades of atheist Soviet rule, the Russian Orthodox Church entered a metaphorically similar hibernation, as it was forced from the center of Russian society to the margins and cut off from most meaningful intellectual and theological engagement with the broader world.

In the post-Soviet era, the Russian Orthodox Church has found a new place in the culture and politics of Russia, but its bishops and theologians have often found it challenging to contextualize the faith they have sustained. In particular, the Russian Orthodox Church missed out on many decades of fruitful theological research that aimed to integrate the discoveries of science and the methods of analytic philosophy.

The St. Gregory the Theologian Charity Foundation is one organization working to help the next generation of Russian Orthodox leaders have greater facility navigating the relations between contemporary discourse in religious, philosophical, and scientific thought. The institution has strong support from the church leadership — it was founded in 2010 by Archbishop (now Metropolitan) Hilarion at the direction of Patriarch Kiril, the church’s global leader. Its offices are located at the Danilov Monastery, the headquarters of the Russian Orthodox Church.

With assistance from the John Templeton Foundation, St. Gregory is carrying out a three-year plan to train future theology professors and bishops to consider ways in which Orthodox theology intersects with contemporary science and philosophy. The aim is to produce  leaders who can share their insights with present and future generations of Russian Orthodox believers and with the broader culture.

The project has numerous components including a survey of all Russian Orthodox Church seminaries to help leaders understand where science and analytic philosophy are and aren’t being currently taught. It also supports 30 academic visits and 12 fellowships for longer-term study by current and future theological leaders at Western seminaries and divinity schools including Yale, Duke, and Notre Dame. In addition, 18 three-day courses will be taught at the Postgraduate school by visiting professors from Western institutions. Finally, the project will support the creation of 24 new courses at the Russian Orthodox Church’s Postgraduate School.

Church leaders have been emphatic about the importance of the project as the Church moves into the twenty first century. “We need to import the West’s scientific heritage and build our own school on this heritage,” says Leonid Sevastianov, executive director of St. Gregory. “So far it’s been beneficial because it’s opened the dialogue and opened our way of thinking.”