Models of Providence: an Abrahamic inquiry 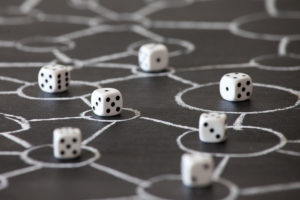 Does God play dice with the universe? Although Einstein famously denounced the possibility, he was not making a theological claim. He was rather voicing his frustration with the apparent implications of quantum theory, which seemed to upend the notion of determinism in physics according to which knowing every detail about a system’s present state allows one to know what will happen to it in the future.

Many religious believers face a similar tension when confronted with true randomness in nature, whether at the quantum level, in the mutations that fuel natural selection, or in the contingent events that define every human life. “I think most religious believers in the past thought that God is in some way not the immediate cause of everything, but certainly the ultimate cause,” says Kelly James Clark, Senior Research Fellow at the Kaufman Interfaith Institute at Michigan’s Grand Valley State University. “When randomness enters the picture, then you have to figure out, as a religious believer, how that is possible.”

BEYOND “SCIENCE AND CHRISTIANITY”

In an effort to begin filling at least some of that vacancy, Clark is leading a capacity-building project to create a larger circle of dialogue concerning science and the three Abrahamic faiths, Islam, Christianity and Judaism. Kelly has recruited a cohort of 24 young scholars, eight each from the three religious traditions. Their backgrounds range from philosophy to quantum physics, but most of them had not done prior work on the science-religion intersection. To offer guidance the junior cohort, ten senior scholars, including physicists, biologists, philosophers, theologians and historians — have also joined the project. Clark’s colleague Jeff Koperski, a philosopher based at Saginaw Valley State University, helps handle the project’s daunting multinational logistics.

THE IMPORTANCE OF PRESENCE

The three-year project is designed with annual weeklong gatherings of the participants to compare notes, learn from one another, and plan future projects. The first of these gatherings was held in the summer of 2017 at the Fetzer Institute in Kalamazoo, Mich. The other two conferences will be held further afield, in 2018 in the historic Christian city of Orhid, Macedonia and in 2019 in Amman, Jordan.

At the Kalamazoo conference, the project’s senior scholars gave academic lectures on probability, quantum randomness, fine-tuning in cosmology, chance in biological practice, and the concepts of freedom, responsibility and evil. The entire team also enjoyed time with 2017 Templeton Prize winner Alvin Plantinga, whose 2011 book Where the Conflict Really Lies: Science, Religion, and Naturalism is a key source text for the project.

“People gave great talks, the questions were good and thorough, and the project got off to a really good start, but in addition many bridges were built that can only be built in person.”

Learn more about the project here.