Who gets to play the blame game? 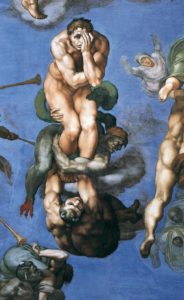 Sometimes important philosophical questions wind up sounding like something a teenager would shout at parents through a closed bedroom door: What gives you the right to blame me?! or maybe This is all really your fault — I didn’t ask to be born! Patrick Todd, a lecturer in philosophy at the University of Edinburgh in Scotland, thinks quite a bit about such questions, which lie at the intersection of free-will theology and what philosophers call the positionality of blame. Many religious traditions hold the theological position that humans will be called to account for their good and bad deeds, and most non-theists offer a conception of moral responsibility. But if free will is an illusion — if our actions are pre-determined, whether by cascading chemical and physical contingencies or by divine preordination — can we really be fairly blamed for our worst acts or lauded for our best ones?

“How could that be appropriate,” Todd asks, “if everything that we do is some in some way orchestrated by God or controlled by God? It would seem that God is both the person who sets up the actions and then criticizes the actions.”

Over the past several years, Todd has been refining his ideas in conversation with two other philosophers, John Martin Fischer of the University of California at Riverside and Derk Pereboom of Cornell. “The three of us had had very different viewpoints on these issues going into the project and maintained them after the project to some extent,” Todd admits. Pereboom is well-known in philosophical circles for arguing that the universe’s physical structure necessarily implies that humans lack the sort of free will that would lead to true moral responsibility. And if we are not morally responsible for our actions, it follows that a just and rational God would not blame us, so much as point out errors and offer corrections. “In the end, Derk believes he can give an account of religious life without the idea of us being responsible,” Todd explains. Fischer, for his part, believes that a lack of free will does not get us off the hook for blame — in his view, God can both create us in such a way that we will do wrong things but still be justified in holding us responsible for doing them.

Todd, on the other hand, believes that God can legitimately hold us morally responsible in part because we have genuine freedom to do what’s right or wrong. “It’s a more attractive theological picture to think of human beings as free and responsible — held responsible by God, but not determined by God,” he says.

Though none of the three has managed to bring the others fully in line with his own opinions, Todd says that each position has benefited immensely from the dialogue the project involved. “Philosophy can be a solitary affair in some respects, but I find that having regular conversation partners about a certain issue moves the quality of thinking along a great deal,” he says.

THE PERSPECTIVE OF THE CREATED

With support from the John Templeton Foundation, Todd and his sparring partners extended their conversation into larger philosophical and theological circles by convening a 2016 conference titled “Manipulation and Moral Responsibility in Ethics and Philosophy of Religion.” The conference attracted scholars with a wide ranging set of interests. “We had lots of people who might not ordinarily be writing on a topic like whether God can hold us responsible,” Todd says. “Because we were connecting that issue with issues that were already present in the free will and moral responsibility debate, there was a lot of interesting overlap, and the conference kick-started some work on this type of issue that probably otherwise would not have gotten done.”

The collaboration with Pereboom and Fischer kick-started a longer-term passion in Todd as well, pushing him to investigate interesting intersections between the legal concept of a court having standing to rule, and the theology of free will — how does God’s “right to blame” relate to concepts like legal jurisdiction?

Watch Todd and Pereboom discuss free will and moral responsibility on a one-hour episode of Philosophy TV.