Across the continent, scholars are offering fresh insights into the dynamic role of religion in the lives of Africans 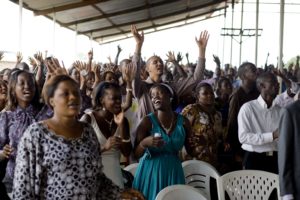 In the Yorubaland region of southwestern Nigeria, hundreds of thousands of Christian and Muslim pilgrims visit Ori-Oke — “prayer mountains” — for meditation, prayer and religious rituals. Although Ori-Oke sites often had previous roles in the practice of traditional local religions, the revival of their importance draws deeply on Christian traditions. The result is a vital form of African Christianity, typical of religious shifts happening around the continent. The groundbreaking anthropological study of Ori-Oke and its meanings, published in 2018, was conducted by researchers from the nearby University of Ilorin, Patrick Nwosu, Lemuel Odeh, Akiti Alamu, and A.Y. Mohammed. The study was part of a continent-wide project to generate new insights into the theology and anthropology of present-day African religious practices by providing resources to researchers working at dozens of African universities, including both flagship national universities and regional institutions. The two-year, $2-million-dollar grant was overseen by Calvin University’s Nagel Institute for the Study of World Christianity with funding from the John Templeton Foundation.

The grant grew out of a multiyear dialogue led by Nagel Institute director Joel Carpenter and program officers at the Foundation, who consulted with African academic and religious leaders to identify more than a dozen areas where African scholarship could help shape global conversations on the impact of religion on everyday life. The two-year project focused on just two of those topics: theological analyses of African Christian spirituality and values, and social scientific study of religious competition and innovation on the continent. Carpenter worked with key colleagues including lead project designer Mwenda Ntarangwi (a scholar of East African hip-hop who is currently CEO of Kenya’s Commission for Higher Education), Cape Town-based Cameroonian social anthropologist Francis Nyamnjoh and Tite Tienou, a professor of theology at Trinity Evangelical Divinity School, to identify potential researchers and publicize their request for proposals. “We reached out to just about every religious studies and sociology department on the continent, and the two competitions excited enormous interest,” Carpenter said. “We got more than 200 responses, and funded 23, all of which were productive — two years out from the project’s end, there have been well over a hundred publications.”

Carpenter notes that African scholars tend to work under different pressures than their counterparts in the global North. Many African universities have been underfunded for decades, and professors are rarely given time off from teaching duties to work on their research. Even at top universities, scholars often lack easy access to key books, articles, and international conferences.

“One of the abiding structural issues for these lines of inquiries is that there are these industries of studying Africa in Europe, the U.S., and Japan,” Carpenter says. In the past, scholarship could take on exploitative dimensions: “Researchers would get the grant money, come to the continent, hire some grad students to help with fieldwork, extract the scholarship, and publish it in the North. It could be as much an extractive industry as mining or oil drilling — and African scholars began to raise holy hell about it,” Carpenter says.

In light of those challenges, Carpenter and Ntarangwi knew that the project couldn’t take a hands-off approach to subgrants that might be typical elsewhere. Instead, they adopted a highly interactive approach that matched grantees with mentoring, provided academic resources, organized mid-grant and capstone conferences in South Africa and Côte D’Ivoire, and gave grantees assistance in navigating the requirements of outside publishers. “These scholars could tell you long tales about how many times they’ve been rejected by European and American journals,” Carpenter says. In the past, innovative papers were often rejected because their authors simply didn’t have the ability to generate the sort of comprehensive bibliographies expected by peer reviewers or to travel to international conferences to give presentations.

With a bit of strategic help, the individual researchers exceeded even Carpenter’s high expectations. In addition to the team from Ilorin’s work on Ori-Oke pilgrimages, the broader project included work as varied as Chammah Kaunda’s theological analysis of Pentecostal nationalism in Zambia, Gabrial Faimau’s investigations into the role of new media in religious positioning in Botswana, and Edlyne Anugwom’s anthropological work analyzing the religious motivations of Boko Haram fighters he interviewed in northern Nigeria.

Looking across the breadth of the completed projects, Carpenter was struck by several common themes. One was the experience of women — many of whom have found the continent’s fast-growing expressions of Pentecostal Christianity both liberating but also imposing new constraints. Another common theme was the intersection of faith and science. In Africa, this discussion centers far less on questions concerning the compatibility of scientific and biblical descriptions of Earth’s history than on approaches to health and healing. “It’s a huge concern,” Carpenter says. “How do you negotiate between Western medicine when you can find it, traditional medicine, and Christian faith healing and other sorts of ministry?” A new set of sub-grants on health and healing in Africa is currently underway, with funding from the Templeton Religion Trust.

“I came out of this project just amazed at the scholarly energy on the continent,” Carpenter says. “The valuable thing about this work is its utter freshness — this is pure discovery.”

Learn more about the Nagel Institute for the Study of World Christianity and project leaders Joel Carpenter, Mwenda Ntarangwi and Francis Nyamnjoh.