Harnessing the power of paradox to unravel how the first forms of life may have developed. 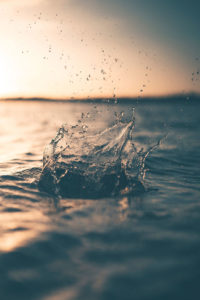 The philosopher Søren Kierkegaard famously referred to paradoxes as “grandiose thoughts in embryo.” When a paradox creates a logical roadblock in a given line of thinking, Kierkegaard saw that it could hold the potential for a profound breakthrough.

When today’s chemists and geologists attempt to understand the conditions under which the first life emerged on earth around four billion years ago, they tend to focus on RNA, which is the most basic family of molecules capable of two requirements for life: metabolism and reproduction. But in explaining how the first RNA might have been formed, they run up against a handful of seemingly intractable paradoxes.

For example, why didn’t all the first forms of organic proto-life simply decompose into disorganized “tars” like soup burned on the stove? How did water become essential for life when it also hampers the assembly of RNA and corrodes it once it forms? If the first forms of life depended on varieties of RNA that could catalyze important chemical reactions, what should we make of the fact that only one in a hundred trillion molecules of RNA has catalytic properties, and the vast majority of those that do end up catalyzing destructive reactions?

Steven Benner, a chemist who leads the Foundation for Applied Molecular Evolution and is one of the founders of the field of synthetic biology, believes that scientists’ understanding of the conditions and processes by which mere chemical reactions became life can be accelerated by tackling such paradoxes head-on. “When generally accepted premises lead to conclusions that life could not have possibly emerged, that requires you to examine the premises,” he notes.

Benner realized that while there was a handful of strong paradoxes that made life’s development seem impossible, it was still only a handful. “If we can knock out over four or five out of, say, ten of these, we can actually make progress towards solving this problem,” he says.

With funding from the John Templeton Foundation, Benner and his team have been overseeing a series of seven subgrants, carried out in labs across the country, each aiming to unravel an identified paradox of the emergence of early life. The results, Benner says, have been exceptionally promising.

A team led by Stephen Mojzsis at the University of Colorado-Boulder examined the apparently contradictory conditions required for RNA to form. The geological record suggests that the atmosphere four billion years ago had been primarily carbon dioxide and nitrogen, incapable of forming components of RNA. But Mojzsis’s team found a loophole in the paradox: they realized that to account for the amounts of rare elements experimentally measured on the earth and moon, an object of a very specific size —  about the size of the moon — must have hit the earth. An object of this size would have caused a transient change in earth’s atmosphere sufficient to create what Benner calls a just-right scenario: “a reduced atmosphere above an oxidized crust where the reduced atmosphere produces compounds that are useful for making RNA and the crust provides the minerals that allow those to be stabilized so they don’t turn to asphalt,” he says. “And that’s pretty big.”

Other subgrant recipients have made similar progress chipping away at their respective paradoxes on topics ranging from RNA strand separation to understanding how water’s corrosive effects might have been avoided. Part of that comes from Benner and Hyo-Joong Kim’s own work on the role minerals can play in stabilizing molecules. “We’ve been able to get pretty much all that we really need to get out of prebiotic chemistry, including molecules that remain stable in water, which is where RNA really has to operate,” Benner says.

In addition to funding the research teams’ in-lab work, the grant allowed Benner to organize meetings to draw the researchers and other experts in the area of early-life chemistry. “It’s an extremely good way to advance the field — getting these experts from around the world to jam onstage like they’re playing jazz,” Benner says. “We hope to be able to have these people talk to each other away from their PowerPoints and actually solve some problems.”

Learn more about Steven Benner’s work at the Foundation for Applied Molecular Evolution.