Multimedia Journal about Faith, Ethics and Scholarship that Bridges the Gap between Academia and the Public Square

Drawing from a range of faith traditions and academic disciplines, a new Muslim-led publication aims to foster thoughtful dialogue. 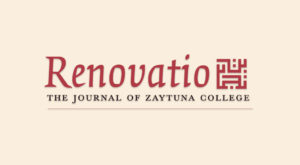 On May 14, 2017, a group of scholars, students, and interested onlookers gathered at a former Christian church sanctuary — now the heart of a Muslim college — in Berkeley, California, to celebrate the launch of Renovatio, a journal attempting to foster dialogue and connections between disparate groups ranging from scholars to religious leaders to lay people. The journal’s editor-in-chief, Hamza Yusuf, is an American convert to Islam who has become one of the leading Muslim public intellectuals in the West. In 2008, Yusuf and several colleagues founded Zaytuna College in Berkeley, which in 2015 became the first U.S. Muslim college to receive formal accreditation.

Yusuf’s speech at the Renovatio launch was a wide-ranging argument for the central place of metaphysics — the strand of philosophy concerned with first principles and basic assumptions — in intellectual and spiritual life. In a speech that referenced thinkers ranging from Greek philosophers Aristotle and Euclid to the medieval theologians Al-Ghazali and Thomas Aquinas through to the Founding Fathers and the present-day “New Atheists” like Sam Harris, Yusuf suggested that the problems facing both the Muslim world and the West stemmed in part from a loss of understanding of first principles. “The root of our crises is a metaphysical crisis,” he said, “and until we address the metaphysical crisis we will only be dealing with the superficial.”

FROM OLD FOUNDATIONS, SOMETHING NEW

In an opening letter included in Renovatio’s inaugural issue, Yusuf framed the new publication in terms of its title. “It is an unusual name for a publication,” he writes, “but we chose the Latinate term renovatio, from which we derive our English word ‘renovation,’ as an aspirational title for the ambitious project we have in mind. The prefix re means ‘again,’ and the base word is derived from the Latin novus, ‘new’: ‘to make new again, to restore to good condition as if new again, to repair, to reinvigorate, to refresh, revive.’”

This idea of making something new again — as opposed simply creating an entirely new structure — is one of the animating forces of the journal. But another of its core principles might be termed bridge-building, both between different religious traditions and between different kinds of people.

“This project started primarily because we felt there were a lot of scholars — Muslim scholars but also scholars of other faiths — whose work is never seen or read by the public, by anybody outside of their specialized fields,” says Safir Ahmed, who serves as Renovatio’s editor.

“The idea is that our writers will draw from the faith traditions, from theology, philosophy, from history, from social sciences to look at contemporary challenges through the lens of those traditions,” Ahmed says.

Essays in the journal’s first issue put that theory into practice, covering topics ranging from the difference between justice and mercy to whether exposure to the torrent of imagery on our smartphones constitutes a moral hazard by crowding out space for thought and reflection. Another essay discusses Muslim metaphysicians’ conception that all things in existence are also “modes of consciousness, bliss, awareness, and knowledge,” leading to the surprising conclusion that the universe and all its contents can be seen as alive. A recurring “Text Messages” feature offers short reflections on important texts, ranging from a poem by the the Sufi mystic Rumi to Hamlet’s Soliloquy.

Renovatio’s second issue will focus on pluralism and tolerance while future issues will likely focus on suffering, epistemology, and the importance of language. The journal’s website will continue to feature content from the print journal alongside videos of author interviews and public events featuring Renovatio authors end editors. “Our underlying assumption is that people are thirsty for this sort of content in these chaotic and confused times,” Ahmed says, “so we really want to draw those people in and cultivate an audience of readers who can begin to influence the public discourse around matters of faith.”