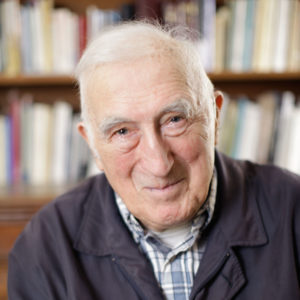 The John Templeton Foundation is saddened to learn of the death of 2015 Templeton Prize Laureate Jean Vanier, founder of L’Arche, the international network of communities where people with and without intellectual disabilities live and work together as peers. He passed away on May 7 at the age of 90.

Until recently, Vanier lived on the grounds of the original L’Arche community in Trosly-Breuil, north of Paris, where in 1964 he invited two intellectually disabled men – Raphael Simi and Philippe Seux – to share a house with him and live together as friends. He named the house L’Arche (French for “ark” and “arch”) to symbolize Noah’s Ark, a “boat” to which he could invite people in pain, and an “arch” or bridge connecting heaven and earth.

L’Arche now encompasses 149 residential communities operating in 38 countries and more than 1,500 Faith and Light support groups in over 80 countries that urge solidarity among people with intellectual disabilities, their families, and their friends.

“We mourn the loss of Jean Vanier, a man whose spirit of generosity, empathy, and loving kindness have inspired millions, and whose life’s work provides a shining example of the true meaning of philanthropy – the deep, boundless love of humanity,” said Heather Templeton Dill, president of the John Templeton Foundation.

At the news conference in London where he was announced as the 2015 Prize Laureate, Jennifer Templeton Simpson noted that Vanier revealed how the power of love can advance spiritual progress in the world. “By recognizing the importance of every individual, regardless of their station in life, Jean Vanier underscores how each of us has the ability not only to lift up others, but also ourselves,” she said.  “His powerful message and practice of love has the potential to change the world for the better, just as it has already changed the lives of countless individuals who have been touched by this extraordinary man.” 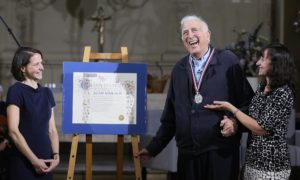 Jean Vanier memorably expressed this message in a video created for the announcement: “To become fully human is to let down the barriers, to open up and discover that every person is beautiful.” And he expanded on it in his address at the Templeton Prize ceremony at the Church of St Martin-in-the-Fields in London: “If we become a friend of somebody who has been humiliated, rejected, put down, seen as unimportant, something happens. If you become a friend of somebody rejected, we are changed.”

The world has lost a spiritual giant today. The editorial board of The Globe and Mail put it best in an editorial published shortly after the announcement that Jean Vanier would receive the 2015 Templeton Prize: “The ideals of humanity, to say nothing of humanity itself, have been made better by Jean Vanier.”

We agree and we join with many around the globe who mourn the loss of Jean Vanier, and yet we also celebrate his inspirational vision because it will live on in L’Arche communities throughout the world.