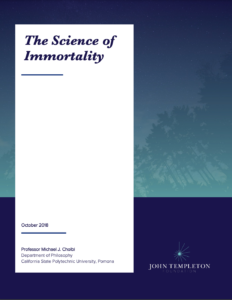 Why is the idea of immortality so fascinating across so many human cultures? One common explanation for the prevalence of belief in some form of immortality is that it offers an alternative to the “existential terror” engendered by contemplating potential non-existence after death for ourselves or other people. Several grantees under the project took up the contention of the Epicurean philosopher Lucretius that it is no more rational to worry about one’s non-existence after death than to worry about one’s non-existence prior to birth. Ben Bradley of Syracuse University examines several potential defenses of the idea that not existing is categorically bad — for instance, because it may deprive us of potential good we might have experienced by living longer — but finds them them unconvincing. As part of a multi-part subgrant examining “Time Bias and Immortality,” Notre Dame philosopher Meghan Sullivan suggests that Lucretius was not correct to argue that rationality requires we have symmetrical feelings about pre-life and post-life non-existence.