The Science of Self-Control 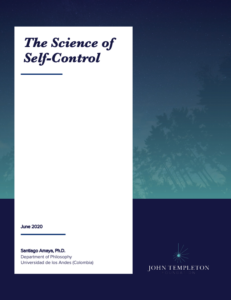 Self-control can be defined as the ability to align one’s behavior with personally valued goals and standards in the light of certain kinds of motivational conflicts. For the last half-century, researchers interested in understanding the structure and dynamics of human motivation have focused on the science of self-control as a window for thinking about self-regulation and sustained goal pursuit. Because of this, we now have a richer understanding of what is involved in self-control, what is required to display it, and why it matters.

Researchers have come to the topic from different traditions. These include philosophers working in action theory and practical rationality, social psychologists interested in motivation and decision making, personality experts studying positively and negatively associated character traits (e.g., conscientiousness, impulsivity), social and life scientists developing interventions to promote life satisfaction, as well as neuroscientists interested in executive functioning and frontal lobes. This multiplicity of voices has produced a rich and diverse field around the science of self-control. Consequently, there are deep disagreements among self-control theorists, from how to define it to how to measure it. This has not prevented, however, some larger consensuses from emerging. Whereas there are many questions that remain open, as we shall see, there is a well-charted territory for theoretical and experimental discussions to take place.

Understanding our capacity for self-control requires, at the very least, (1) knowing how to define it and how to conceptualize its core manifestations; (2) finding suitable ways of studying it empirically; (3) constructing models that tell us how it is exercised or how we fail at it; (4) identifying strategies for developing self-control; and (5) grasping its connection with similar psychological constructs.

Read the full white paper on The Science of Self-Control, written by Dr. Santiago Amaya of Universidad de los Andes (Colombia), which examines each of these topics in the light of the recent literature.